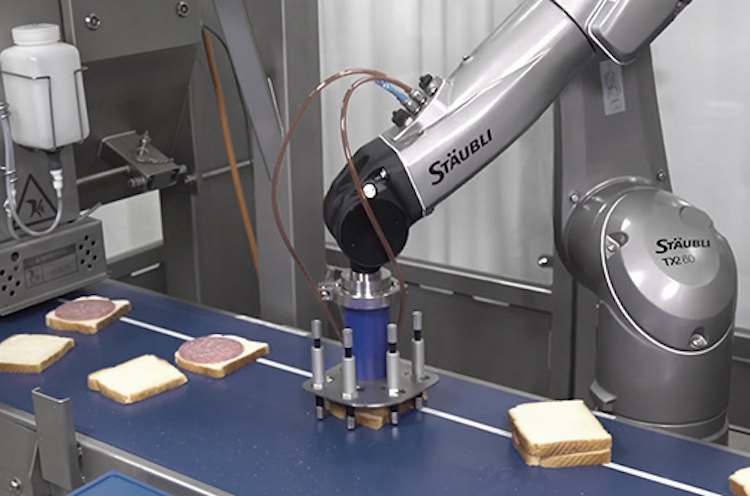 A company called Grote has demonstrated a robotic sandwich-making system which it developed in partnership with Stäubli Robotics. (See video below.)

Grote is a manufacturer of food processing equipment and the system it showcased at the International Baking Industry Exposition is said to be feature “robotic food contact for the first time in America”.

Grote’s systems shows how it utilizes Stäubli’s TX2-60 HE robotic arms to assemble sandwiches, cut them, and place them on trays.

Explaining why his company chose Stäubli, CEO Bob Grote, said: “We believe they have the most hygienic design on the market today.”

It was Stäubli’s first appearance at an international show. IBIE is believed to be the biggest trade event in the western hemisphere for the bakery sector .

One of the food industry’s greatest challenges is the need for flawless hygiene. Human intervention at any point in the food processing chain can introduce contamination.

Stäubli says its robots are “designed specifically for highly sensitive environments, minimize this risk and optimize quality”, adding that they can also “boost speed, efficiency and productivity”.

IBIE gave Stäubli the opportunity to showcase these capabilities on the global stage.

Also in action at the Stäubli booth was the TX2HE food-grade robot for primary environments, which demonstrated ultrasonic cutting, cake decorating and bread scoring applications.