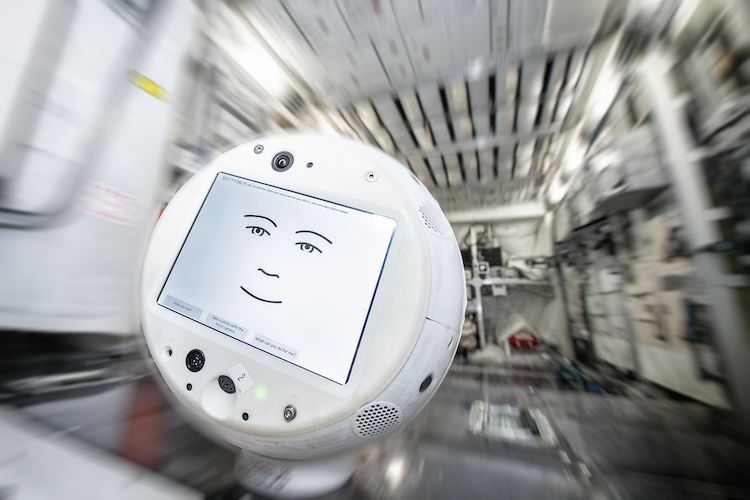 A new version of the robotic astronaut assistant Cimon – Crew Interactive MObile companioN – has been sent to the International Space Station.

Cimon-2 lifted off on its journey into space on 5 December 2019. This modified version of the astronaut assistant has been equipped for new tasks and was developed and built in Germany.

Like its predecessor, Cimon-2 will be deployed in the Columbus European research module. Cimon is a free-flying, spherical technology demonstrator for human-machine interaction and features artificial intelligence.

“Cimon-1 – our prototype – landed back on Earth on 27 August 2019 after spending 14 months on the ISS, and has now arrived at Airbus in Friedrichshafen,” says Dr Christian Karrasch, Cimon project manager at the German Aerospace Center.

The technology experiment was developed and built by Airbus in Friedrichshafen and Bremen on behalf of the Space Administration and funded by the German Federal Ministry for Economic Affairs and Energy.

The demonstrator’s artificial intelligence is based on IBM’s Watson technology, with medical experts from the Ludwig-Maximilian University Hospital in Munich, responsible for scientific issues.

On 15 November 2018, Cimon-1 became the world’s first AI to be deployed on the ISS, working with German ESA astronaut Alexander Gerst.

“We want to use Cimon-2 to build on the successful demonstration with Cimon,” says Christian Karrasch.

During its debut the first Cimon impressively demonstrated that an AI-based mobile application can function on the ISS, working together with Alexander Gerst for 90 minutes.

“Cimon-2 is expected to remain on the ISS and support the crew for up to three years,” explains Till Eisenberg, Cimon project manager at Airbus. “Cimon-2’s microphones are more sensitive, and it has a more advanced sense of direction. Its AI capabilities and the stability of its complex software applications have also been significantly improved.

”Another key point in Cimon’s evolution is its extended service life: During this mission, we are also considering further steps, such as uploading the AI to a cloud on the ISS.”

This would represent a milestone in the development of a completely autonomous assistance system.

Christian Karrasch, DLR project manager, says: “When travelling to the Moon or Mars, the crew would then be able to rely on an AI-based assistance service, even without a permanent data link to Earth. One application back on Earth could be to support people with complex tasks in areas with poor infrastructure, for example.”

IBM is responsible for the implementation of Cimon’s artificial intelligence.

“During its first deployment on the ISS, Cimon proved that it can not only understand content in context, but also the intention behind it,” explains Matthias Biniok, IBM project lead for the Watson AI.

“Cimon-2 is taking this a step further. Thanks to the IBM Watson Tone Analyzer from IBM Cloud in Frankfurt, Germany, it is now capable of assessing the astronauts’ emotions and reacting in a manner that is appropriate to the situation, either at the request of the astronauts or when its emotional analysis is being tested as part of an experiment.

“This means Cimon-2 can, if required, switch from being a scientific assistant to an empathetic conversation partner.”