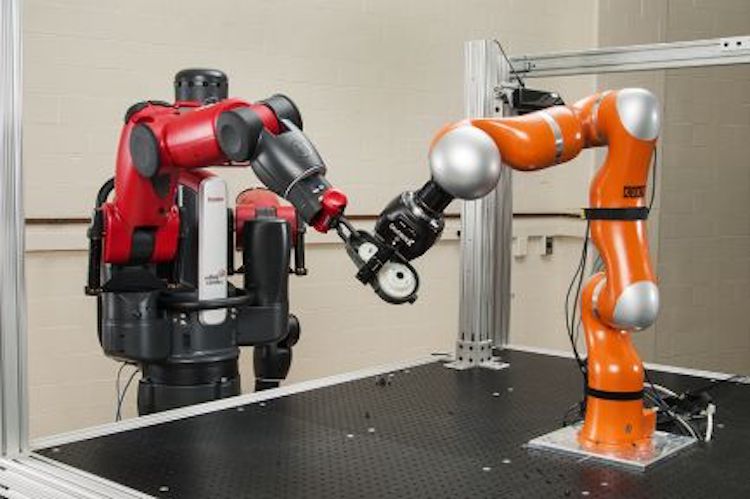 The collaborative robotics market is forecast to account for approximately 30 per cent of the total overall robot market by 2027, according to a report by Interact Analysis.

The growth rate of collaborative robots is leading the robotics industry, adds the researcher.

Logistics will “surpass automotive” to be the second largest end user of collaborative robots by 2023, with electronics in first place.

In the next five years, the fastest growing regions for collaborative robot shipments will be China and the USA.

Interact Analysis forecasts that revenues for cobots will reach $5.6 billion in 2027, accounting for almost one third of the total robotics market, and that < 5 kg and 5-9 kg cobots, popular in small to medium-sized industrial settings, will represent the majority of sales in 2023.

Material handling, assembly and pick and place will be the three biggest applications of collaborative robots.

But these functions, which accounted for 75 per cent of cobot revenues in 2018, will drop to below of 70 per cent total revenues by 2023, as other functions for cobots are developed.

The use of cobots in non-industrial applications will play a significant role in the coming years – in sectors such as life sciences, logistics, and the hospitality sector.

In part this is because they are flexible and easy to set up, making them attractive to smaller companies which may not have previously considered using robots.

Labour shortages and the drive to improve efficiency mean that China will be the fastest growing region for cobot shipments.

The demand for simple, cost-effective, entry-level robots, together with different regulations surrounding industrial equipment in China has fuelled the growth of Chinese cobot manufacturers who only supply their local market.

This has arguably distorted the market figures. Interact Analysis has responded to this by including in its report two data sets, one with and one without the impact of China.

It is important to note, however, that growth outside of China is still forecast to rise at annual growth rates of more than 30 per cent in the next 5 years.

Maya Xiao, lead analyst on cobots for Interact Analysis, says: “The collaborative robot market is still relatively immature, but Interact Analysis has identified clear potential growth areas, both in industrial and non-industrial settings, enabling manufacturers to respond effectively, and take full advantage of what we predict to be an area which will occupy a significant market share in the coming years”.