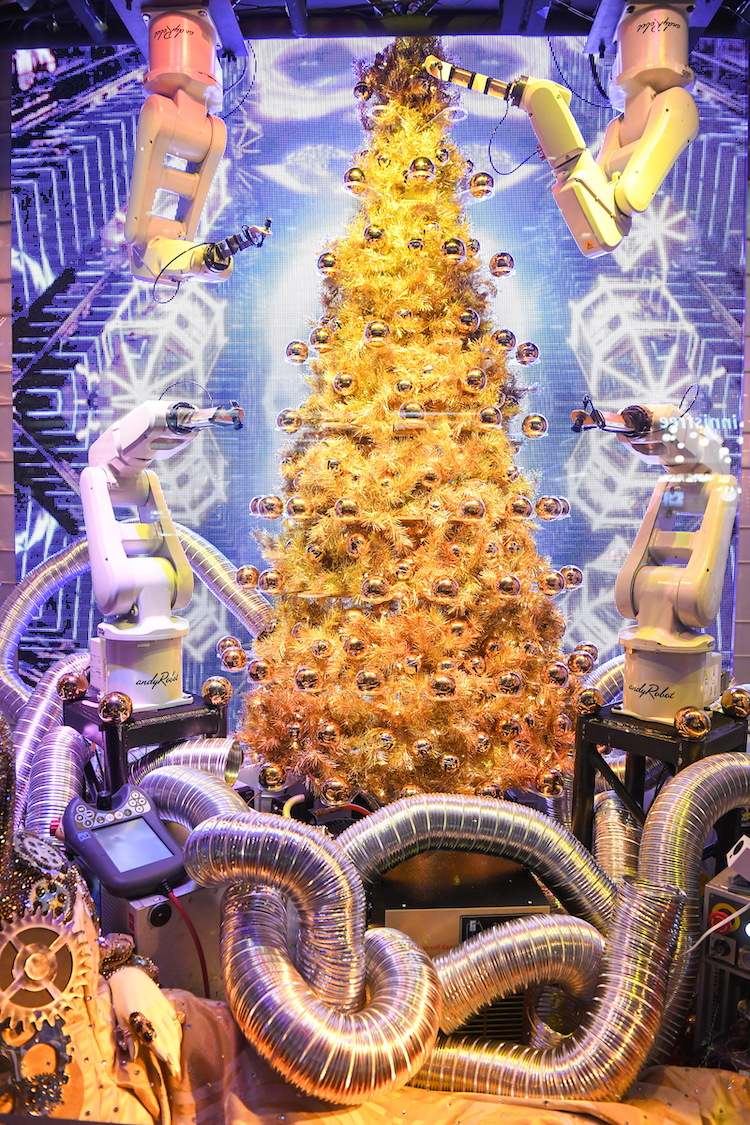 A dozen ABB robots were on hand this week to ring in the holiday season at Bloomingdale’s iconic New York flagship store. (See video below.)

Described by ABB as the “next step in human robot collaboration”, the robots were seen trimming trees, and entertaining shoppers with holiday tunes and karaoke.

ABB’s robots are the main attraction in three of Bloomingdale’s 12 holiday window displays at Lexington and Third Avenue, as ABB says it “demonstrates the potential for its robotics and automation technology to revolutionize visual merchandising and make the retail experience more dynamic and whimsical”.

ABB and long-time creative partner andyRobot say they have harnessed the excitement of human-robot interaction at Bloomingdale’s to engage shoppers through a unique visual experience and to explore how robotics technologies could be applied in a retail environment.

The 12 robots of Christmas

Two floor-mounted and two ceiling-mounted IRB 120 robots co-ordinate their movements to pass 20 gold ornaments to each other, placing them on the branches, before stripping the tree and starting the 30-minute process again.

A Festive Orchestra of four ABB IRB 1200 robots play brass shakers, a tambourine, a concert chime and a futuristic digital xylophone to entertain shoppers with a range of Christmas carols.

Visitors to Bloomingdales can interact with the robot performers from the street and choose from three holiday classics: Deck the Halls, Jingle Bells and We Wish You a Merry Christmas, while pressing a button on the window takes a picture of the visitors which appears on a video monitor behind the robot band inside the window display.

It wouldn’t be a holiday celebration without karaoke, so the third display is a RoboScreen Christmas Carol Karaoke window.

Shoppers can select from a range of holiday songs, with the lyrics appearing on three moving 38” graphical screens attached to the arms of three IRB 120 robots.

RoboScreens, patented by robot animator andyRobot, bring highly coordinated six-axis motion to video displays. Assembling in various formations, when together RoboScreens can display one large cohesive video or image, and when apart they can display individual, synchronized images that virtually jump from screen to screen.

This creates a highly engaging and dynamic viewer experience which, in this case, inspires window shoppers on the street to participate in the festive singalong.

Designed to work safely alongside humans, customers can interact directly with YuMi to create a unique merchandising experience for Nespresso by allowing customers to see their new product in action.

With its precision and mobility, YuMi automates the entire brewing process, from handling and loading the selected drink pod, to serving the hot beverage and disposing of the used capsule for recycling.

Marc Segura, ABB’s global head of service robotics, says: “We are excited to be part of such an iconic celebration as shoppers in New York kick off the holiday season.

“As well as bringing some festive cheer to Bloomingdales’ customers, we are showcasing how robotics and automation technology could help revitalize the retail experience.

“Our demonstrations in Bloomingdales show how robotics can make visual merchandising more dynamic and engaging.

“In the future, retailers could use robotics to create innovative mediums to interact with customers, demonstrate products and engage at the point-of-sale with far more appeal and relevance than traditional static point-of-sale displays.”

All of the robots at Bloomingdales are being monitored 24 hours a day by the ABB team from their US Robotics headquarters in Auburn Hills, Michigan using ABB Ability Connected Services technology.

This sophisticated system remotely monitors and analyzes intelligence directly from the robots, allowing ABB technicians to identify and address potential issues that could lead to an unplanned stoppage before it occurs.

Andy Flessas (aka andyRobot) is an American robotics designer, computer animator and proprietor of the company Robotic Arts. He invented the RoboScreen, a robotically controlled video display, and is the author of RobotAnimator software.

RobotAnimator is a plug-in for computer animation software Maya which allows robots to glide, sway and loop, among other stunts.

Flessas began working with ABB Robots in 1999, and since then has developed robotics solutions for the artistic and entertainment industry all over the world.