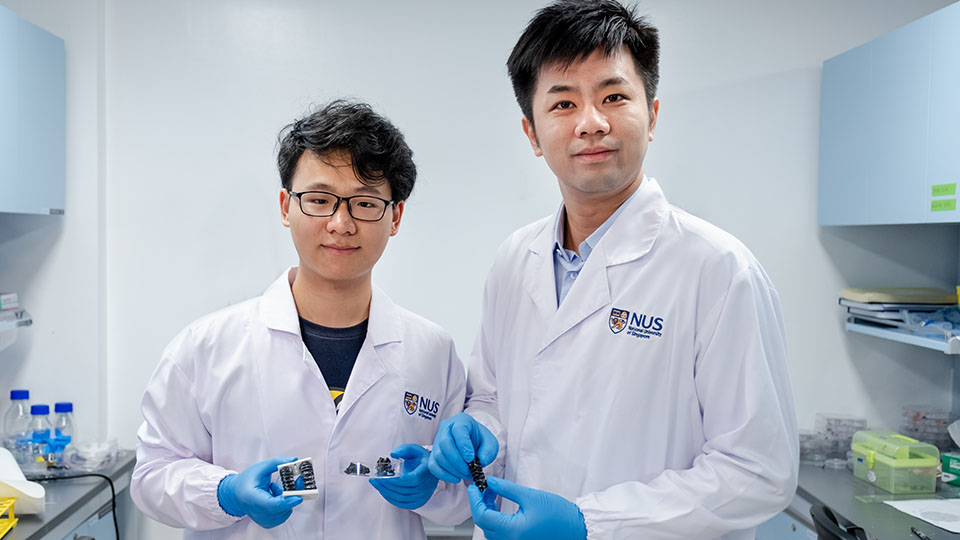 Researchers at the National University of Singapore have created a new metallic material which they say is suitable for flexible soft robots. (See video below.)

Origami robots are described as “state-of-the-art soft and flexible robots” that are being tested for use in various applications including drug delivery in human bodies, search and rescue missions in disaster environments and humanoid robotic arms.

Because these robots need to be flexible, they are often made from soft materials such as paper, plastic and rubber.

To be functional, sensors and electrical components are often added on top, but these add bulk to the devices.

Now, a team of NUS researchers has developed a novel method of creating a new metal-based material for use in these soft robots.

Combining metals such as platinum with burnt paper (ash), the new material has enhanced capabilities while maintaining the foldability and lightweight features of traditional paper and plastic.

In fact, the new material is half as light as paper, which also makes it more power efficient.

These characteristics make this material a strong candidate for making flexible and light prosthetic limbs which can be as much as 60 per cent lighter than their conventional counterparts.

Such prosthetics can provide real-time strain sensing to give feedback on how much they are flexing, giving users finer control and immediate information — all without the need for external sensors which would otherwise add unwanted weight to the prosthetic.

It is also more power-efficient, enabling origami robots to work faster using 30 per cent less energy. Furthermore, the novel material is fire-resistant, making it suitable for fabricating robots that work in harsh environments as it can withstand burning at about 800°C for up to 5 minutes.

As an added advantage, the novel conductive material has geothermal heating capabilities on-demand — sending a voltage through the material causes it to heat up, which helps to prevent icing damage when a robot works in a cold environment.

These properties can be used in the creation of light, flexible search-and-rescue robots that can enter hazardous areas while providing real-time feedback and communication.

The metal-based material is produced through a new process developed by the team called “graphene oxide-enabled templating synthesis”.

Cellulose paper is first soaked into a graphene oxide solution, before dipping it into a solution made of metallic ions such as platinum. The material is then burned in an inert gas, argon, at 800°C and then at 500°C in air.

The final product is a thin layer of metal — 90 micrometres (μm), or 0.09mm — made up of 70 per cent platinum and 30 per cent amorphous carbon (ash) that is flexible enough to bend, fold, and stretch.

This significant research breakthrough was published in the prestigious scientific journal Science Robotics on 28 August 2019. Other metals such as gold and silver can also be used.

Team leader Assistant Professor Chen Po-Yen used a cellulose template cut out in the shape of a phoenix for his research.

“We are inspired by the mythical creature. Just like the phoenix, it can be burnt to ash and reborn to become more powerful than before,” said Asst Prof Chen, from NUS Chemical and Biomolecular Engineering.

The team’s material can function as mechanically stable, soft, and conductive backbones that equips robots with strain sensing and communication capabilities without the need for external electronics.

Being conductive means the material acts as its own wireless antenna, allowing it to communicate with a remote operator or other robots without the need for external communication modules.

This expands the scope of origami robots, such as working in high-risk environments (for example, chemical spills and fire disaster) as remote-control untethered robots or functioning as artificial muscles or humanoid robotic arms.

Yang Haitao, doctoral student at NUS Chemical and Biomolecular Engineering and the first author of the study, said: “We experimented with different electrically conductive materials to finally derive a unique combination that achieves optimal strain sensing and wireless communication capabilities.

“Our invention therefore expands the library of unconventional materials for the fabrication of advanced robots.”

In the next steps of their research, Asst Prof Chen and his team are looking at adding more functions to the metallic backbone.

One promising direction is to incorporate electrochemically active materials to fabricate energy storage devices such that the material itself is its own battery, allowing for the creation of self-powered robots.

The team is also experimenting with other metals such as copper, which will lower the cost of the material’s production.