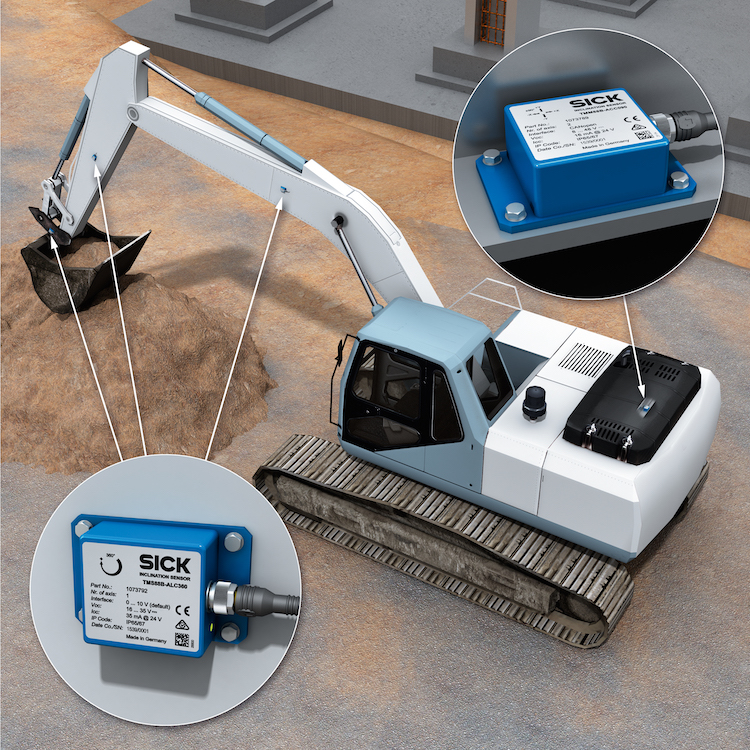 The company adds that the sensors will “aid the real-time safe and efficient operation of outdoor vehicles and machinery, such as mobile cranes, construction and agricultural machinery, or municipal vehicles”.

At the heart of both sensors is an Inertial Measurement Unit (IMU) consisting of an acceleration sensor and a gyroscope, using MEMS technology to each measure in 360°, x, y and z directions. 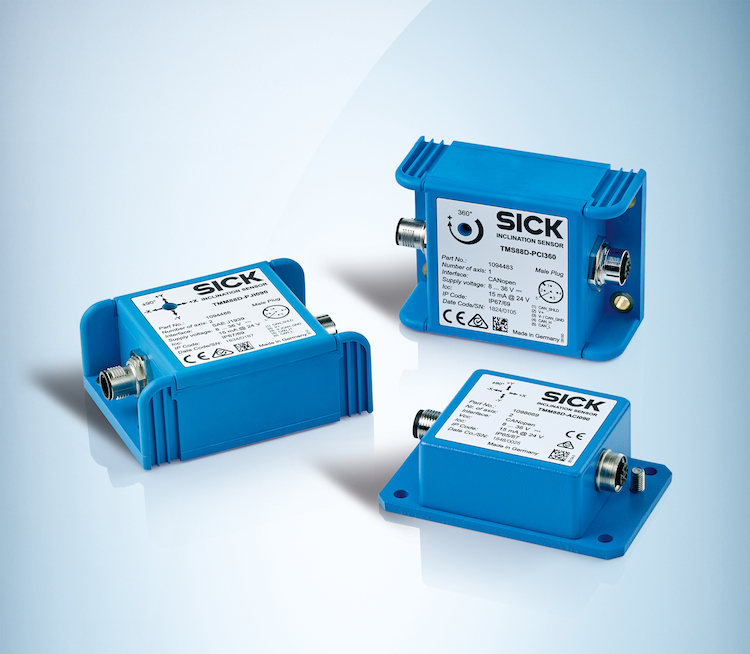 Proven over 100s of hours of testing with customers in tough conditions, the sensor’s groundbreaking intelligent fusion algorithm then processes the measurements to differentiate between true inclination values and eliminate unwanted signals caused by lateral accelerations.

Darren Pratt, SICK’s UK product manager for motion control sensors, says: “Lateral, or sideways, accelerations in the drive mode of vehicles as a result of slew or cornering, or due to shocks caused by the tool on an excavator arm, for example, can falsify the measurement of inclinations and compromise a vehicle’s performance, or even lead to dangerous operation.

“While conventional MEMS-based inclination sensors use filtering techniques to suppress interference to some degree, which often lead to delays in signal response, the SICK TMS88 D and TMM 88D deliver millisecond response and precise data output, so industrial vehicle manufacturers have the opportunity to build-in higher-level protections, for example to the risks of vehicle tipping, collisions or overloading.”

The TMS88 Dynamic is calibrated for single-axis angle measurement over 360° with a configurable zero point, while the TMM88 Dynamic delivers accurate measurement of inclinations in two axes (± 90°) without mutual interference.

With a temperature range between -40°C and 80°C, a shock resistance of 100g, and completely sealed electronics, the sensors offer the option of plastic or metal enclosures both tested to IP67 and IP69, making them more than a match for operation in the harshest outdoor conditions.

Not only do both inclination sensors provide measured values, but also raw data output that machine builders can use to engineer specific applications for vehicle controls such as collision avoidance, direction detection or to record the development of vibrations.

Both sensors offer interfaces with SAE J1939 for integration into automotive oriented control systems as well as CAN Open communications for factory automation applications such as automated guided vehicles.

Commissioning of the sensors as part of the vehicle control system is straightforward via programmable logic controller or controller-oriented software, or users have the option of using SICK’s PGT-12-Pro handheld programming tool for easy set-up.

Using these tools, sensor parameters can be easily configured to optimise the sensor performance to meet the requirements of individual applications.

SICK is already working with leading industrial vehicle manufacturers and specialist integrators to realise the opportunities they present.