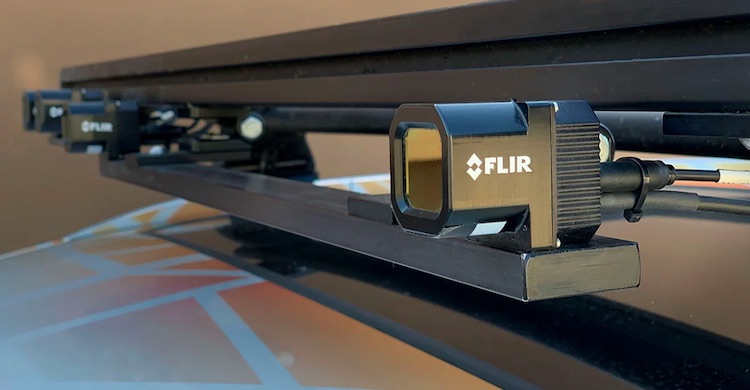 FLIR Systems says its Boson-based thermal sensing technology has been selected by Veoneer, a tier-one automotive supplier, for its “Level 4” autonomous vehicle production contract with a top global automaker, planned for 2021.

FLIR says the Veoneer system will be “the first in the industry” to include multiple thermal sensing cameras that provide both narrow and wide field-of-view capabilities to enhance the safety of self-driving vehicles.

Thermal sensing cameras excel in driving situations where other sensor technologies are challenged, including low-visibility and high-contrast conditions such as:

When combined with analytics, thermal sensing cameras can help detect and classify a broad range of common roadway objects and are especially adept at detecting people and other living things, “what autonomous vehicles want to avoid most”, says FLIR.

With the ability to see up to four times farther than headlights at night, thermal sensors detect the heat given off by everything.

“FLIR’s automotive-qualified thermal sensing cores are a key component of Veoneer’s thermal sensing cameras and systems, which have proven effective on hundreds of thousands of passenger vehicles to date.

“This selection shows the value of thermal sensing for self-driving applications, paving the way for future adoption by other automotive manufacturers.”

FLIR thermal sensing cores are also part of Veoneer’s fourth generation thermal sensing system scheduled to launch next year. With more than a decade of experience in the automotive industry, FLIR has been a key partner of Veoneer to support driver early-warning systems in vehicles made by General Motors, Volkswagen, Audi, Peugeot, BMW, and Mercedes-Benz.

This latest contract represents a new phase for FLIR and its thermal sensing technology for the benefit of autonomous, or self-driving, vehicles.