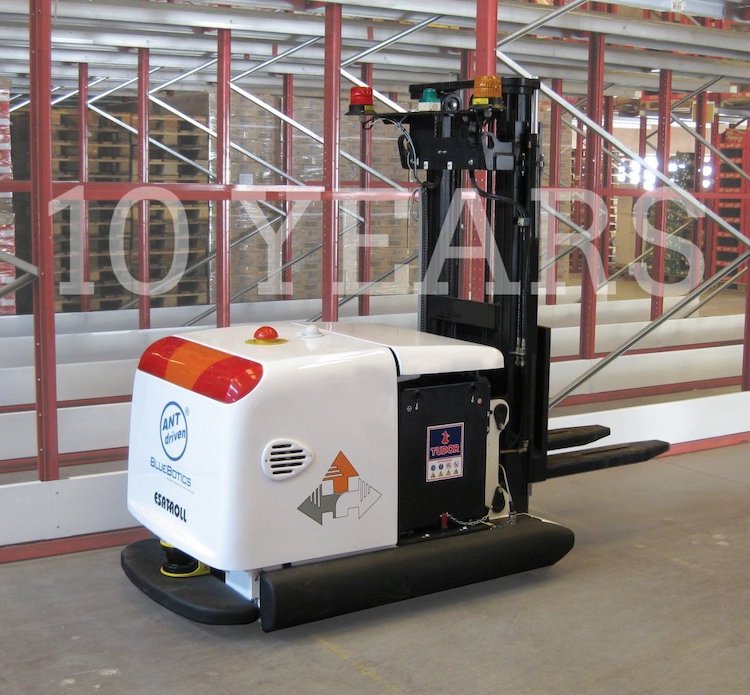 BlueBotics chose the recent CeMAT event in China as the platform to celebrate ANT’s 10-year milestone, since the first vehicle driven by its ANT went into commercial operation.

The company also showcased its ANT lite+ and ANT localization+ products’ new support for omnidirectional vehicle movements at the show.

The first ANT driven vehicle to go into commercial operation was an Esatroll general-purpose Paquito AGV. This was installed at Dal Colle (Barilla Group) in Italy in 2009.

Since then, as of October 2019, over 1,750 ANT driven industrial vehicles have been commissioned at sites around the world.

Nicola Tomatis, CEO of BlueBotics, says: “A primary reason for our success is the robustness of our ANT navigation solution. As customers often tell us when choosing to partner with BlueBotics, the platform just works.

“AGV makers – including several of those at CeMAT Asia – also appreciate the close, professional integration support we offer.

“This is crucial to the success of a project, whether a customer is developing a brand new AGV, upgrading an existing AGV’s navigation or automating a manual vehicle.”

He says: “We have modules such as ANT lite+ integrated in 100 kilogram AMRs for cleanroom applications, while other customers are using ANT to guide huge vehicles that regularly move loads of 25 tons or more.”

Tomatis says: “In most cases our customers develop vehicles based on tricycle or differential drive kinematics. For these models, ANT lite+ is typically the optimal solution.

“However, there are exceptions – sites where omnidirectional movement makes all the difference – such as ultra-complex environments or older sites that cannot easily be optimized for AGV use.

“That’s why, as always, we’ve listened closely to our customers and expanded our platform’s omnidirectional support.

“With the latest version of our ANT software, manufacturers can reap all of the space-saving benefits that omnidirectional AGVs can bring, programming these movements simply and efficiently at the click of a button.”