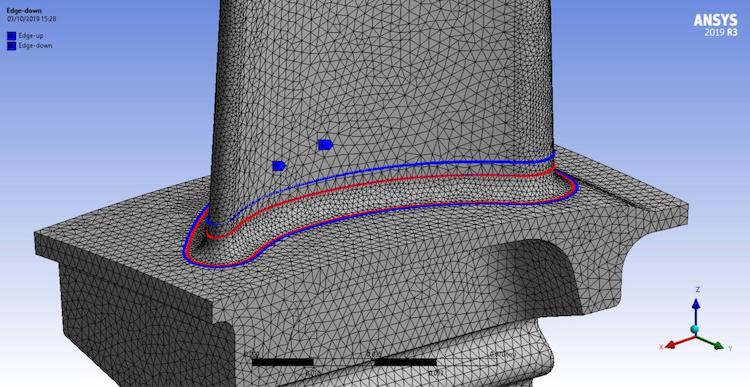 As engineers in industry and research look to develop digital twins of their physical products – with the longer-term goal of integration with the industrial internet of things – the pivotal importance of up-front, accurate, real-time modeling and simulation to optimize both manufacturing and product performance is becoming very clear.

Based on radial basis functions the software is used to drive mesh-smoothing (morphing) from source points and their displacements.

Mesh morphing is essential for successful reduced-order modeling, which allows physics-based analysis of product performance and durability to be carried out more accurately and in much less time than traditional methods. Michel Rochette, director of research at Ansys, says: “Developing ROM within Ansys has been a priority for us.

“Merging physics-based understanding with manufacturing analytics delivers the insights that unlock the true value of the Digital Twin.

“The mathematical techniques behind ROM require that everything has the same mesh topology for all the geometrical parameters in your model – and RBF Morph provides that.”

RBF Morph has been offered within Ansys Mechanical and Ansys Fluent CFD capabilities for several years.

The new coupling with Twin Builder underscores the value of the technology to Digital-Twin functionality, which optimizes control of a company’s product and/or equipment assets.

Rochette says: “If you want to include real-time 3D simulation in your Digital-Twin approach it is mandatory to have the approximation that a reduced-order model can provide.

“The future of the IIoT is being built on that, thanks to ROM and RBF Morph.”

RINA, a leading global provider of engineering consulting for industrial services and advanced technology, has an ongoing partnership with RBF Morph to offer Digital-Twin-based workflows for product development.

(RINA, Ansys, RBF Morph and others are currently partnering in a €4 million project on medical digital twins: meditate-project.eu).

For a turbine-blade project, RINA was looking for a methodology to quickly predict how any redesigns would affect the blade’s structural response and aerodynamics.

The goal was to modify the curved fillet region at the root of the blade to reduce the stress concentration and increase service life by limiting fatigue.

Rather than create a new geometry, mesh and simulation for each design iteration, RINA used RBF Morph, in conjunction with Ansys Mechanical, to explore the blade’s design space efficiently and determine the effects of design changes.

Meshing the original blade design and using finite element analysis (FEA), the engineers calculated a maximum principal stress of about 195 MPa; the stress peak occurred close to the point where the cross section of the blade had an important geometrical variation.

The engineers were looking to smooth out the force and reduce peak stress by adopting a larger radius at the root of the fillet.

The RBF Morph process RINA used involved varying the positions of two curves that controlled the shape of the fillet.

First the mesh’s nodes were extracted to follow the new shape of the fillet; the engineers specified how the nodes could move as the mesh’s volume morphed along the new curves.

They were also able to define nodes that stayed fixed during the morph. With the right inputs, the engineers were able to control the morphing process so the volume and surfaces deformed smoothly and properly.

Ultimately 125,000 nodes were updated in just 15 seconds to accommodate the deformation without excessively degrading the quality of the mesh.

With their RBF Morph procedure established, RINA’s engineers then carried out a two-parameter optimization of the fillet control points using response surface methods, design of experiments and parallel plots.

“We now include RBF Morph in our design processes to help us more quickly develop better solutions for our customers.”

“When integrated via the IIoT, the technology is ultimately intended to support field-equipment maintenance – tracking performance and predicting or detecting worn parts in need of repair or redesign.”

Spinner is a European Community-funded doctoral training program aimed at early-stage bioengineering researchers, with the goal of training them to design the next generation of repair materials and techniques for spine surgery.

A recent project focused on the planning of surgeries to treat vertebral fractures, which are often repaired by means of rods and screws implanted directly into a patient’s individual vertebral bodies.

Spinner PhD candidate Marco Sensale carried out a sensitivity analysis supported by RBF Morph to estimate the influence of the size of the screw on the amount of stress in the screw and strain in the vertebra.

Sensale says: “The two parameters that determine the size of commercial medical screws are the length and the diameter, which have to be chosen during the planning for each individual patient.

“This choice is often based on anatomic measures as well as the experience of the surgeon.

“By modeling Digital Twins of individual vertebras and screws that have different geometries we can rapidly perform simulations to identify which relationships between different parameters will lead to surgical success for a particular patient.”

Sensale used RBF technology to update only the nodal positions of his models, instead of remeshing the geometry every time as he changed the length of the screw (Image B1).

This provided results more quickly with each iteration. He also modelled an offset to the lateral surface of the screw in a similar fashion in order to explore the stress resulting from different screw diameters (Image B2).

Preliminary results of this ongoing study show the least amount of overall stress (MPa) within those screws that are slightly longer and wider in diameter.

A second arm of the research examined peak minimum principal strain in the vertebra itself (Image B3) after implantation of a screw. Preliminary results indicate the least percentage of strain in the bone when a slightly wider, longer screw is used.

With research ongoing, Sensale, says, “We are working to provide quantitative information to support surgeons in their decision-making and RBF Morph tool is providing us with a valuable tool for this project.”

RBF’s Biancolini says: “Thanks to medical Digital Twins like those being created for this Spinner project, surgeons will be able to plan for, practice, and achieve the best outcomes for each patient they treat.”

Availability for both commercial and student applications

Biancolini, Associate Professor of Machine Design at the University of Rome, appreciates the broad reach of applications for which his software is being used.

He says: “Digital Twins are the future of enterprises of all sizes.

“Now that large solver capacity and high-performance computing are available and considered standard resources for product design, a wide range of industry users can take advantage of our technology to help them optimize their designs at lightening speeds.”

RBF Morph technology is offered to Ansys users in two products: an ACT Extension for Ansys Mechanical and an add-on for Ansys Fluent.

The ACT Extension is available on the Ansys App Store both as a commercial version and both as a no-cost version as a companion to the Free Academic software of Ansys.

For further information view a video here or go to http://rbf-morph.com