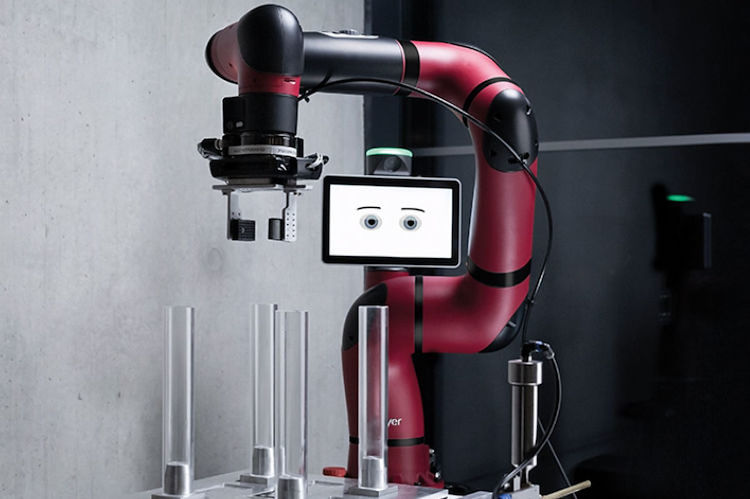 Rethink Robotics, which is now part of the Hahn Group, has launched a new version of its collaborative robot, Sawyer.

The Sawyer Black Edition is now available for pre-order and will be presented for the first time at K 2019 in Düsseldorf.

The new hardware update comes one year after the takeover of Rethink Robotics’ assets by Hahn Group.

The Sawyer Black Edition is the result of the combination of German engineering and longstanding application experience.

The Sawyer Black Edition can be pre-ordered now; first deliveries will take place in 2019.

Rethink says the Sawyer Black Edition contributes to a quieter working environment and is therefore even more popular among employees.

The company adds that the improved component quality of the Sawyer Black Edition “significantly raises the collaborative robot’s reliability”.

At K 2019, the Sawyer Black Edition will be demonstrated at the Hahn Group at booth E61 in hall 10 as part of a palletizing application for the packaging of boxes and plastics parts.

With the Black Edition Rethink Robotics continues to stand for easy application, flexibility in use and high acceptance among employees.

Tasks that are dangerous for humans are, among others, possible applications. Some of these include CNC machine assembly, circuit board assembly, metal processing, injection molding, packaging, loading and unloading, as well as tests and inspections.

Rethink says the Sawyer collaborative robot solution is “ready for use immediately after delivery” and equipped with Intera software and two camera systems.