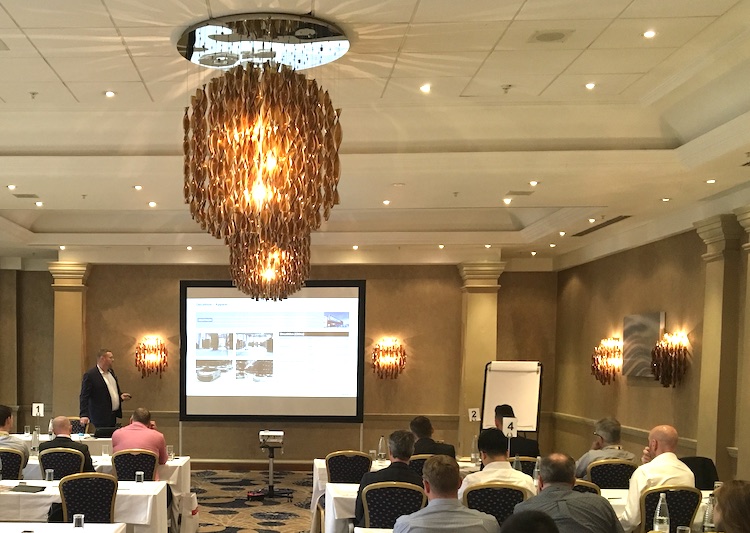 Geek+ Robotics, the world’s leading supplier of warehouse robots, has been providing technical insights into its latest innovations at a forum on the sidelines of IMHX, the ongoing intralogistics technology show being held in the UK.

Senior executives from Geek+, which has sold more than 7,000 warehouse robots since its inception five years ago, presented a variety of solutions that will add completely new functionalities to its current offerings.

Some of the ideas are still at the idea stage, while others are being developed in partnership with clients in the logistics and manufacturing industries.

Alex McCutcheon, senior sales and marketing manager, Europe, provided a number of examples from the manufacturing industry in which Geek+ robots are already changing the way assembly tasks are undertaken.

In the presentation and in an interview with Robotics and Automation News, McCutcheon said: “The automotive industry generally uses assembly lines where vehicles are moved using overhead crane-like machines which pick up the vehicle bodies and move them along.

“But we’ve been working with automotive manufacturers who have been using our autonomous mobile robots to move vehicle bodies.

“Also, automotive components as well as parts such as doors can be placed inside compartments within customised shelf units on the robots. Then, of course, they can be moved from anywhere to anywhere in any direction autonomously by the robot.

“Another innovation is in the way our robot moves – a slight but significant change, which means the robot can move in an ‘arc’ rather than stop, turn a certain number of degrees, and then move.

“The arc movement is a feature of our new S20C sortation system (pictured below), which is on show here at IMHX, and it saves time.” These innovations enable manufacturers and other companies to be more flexible in the way they design their facility, added McCutcheon.

In some instances, autonomous mobile robots can enable the layout of a factory to be completely different to what might be called the traditional or established system, which tends to be linear and relatively expensive because it uses largely fixed infrastructure.

The way manufacturers set up their production hasn’t fundamentally changed much in decades. For example, automakers use a linear assembly line where the bodies of cars are suspended above a linear production line and moved along slowly as robots or workers perform various tasks all the way along the line.

Instead of using what could be described as an “overhead conveyor” to move the cars along, autonomous mobile robots could carry them along the assembly line.

In fact, instead of a linear assembly line, autonomous mobile robots could be used to move the vehicle in a zig-zag or meandering pattern, perhaps from one work cell to another, delivering and collecting them as and when appropriate.

This new approach will allow companies to automate their facilities at relatively low cost and see returns on their investments in much shorter time frames.

“Autonomous mobile robots enable companies to make that big leap from manual operations to automated operation,” said McCutcheon. “Returns on investment times can be around two years or lower with autonomous mobile robots, whereas ROI with traditional systems – such as conveyors, ASRS and cranes – can be 5 to 10 years.

“The initial investment is lower as well, especially if the customer chooses the robotics-as-a-service option, where they sort of hire the systems.”

Dr Leo Wang, Geek+ Robotics’ project director, overseas business, was also one of the executives making the presentation, and he hosted the Q&A at the end. The audience was made up of technology experts who are employed as consultants by companies which are looking to automate their operations.

Among the innovations Wang spoke about was a new, multi-level system automated storage and retrieval system, with which Geek+ intends to compete with crane-based ASRS warehouse layouts offered by other companies.

“We are collecting data from our partners and will continue to improve the systems we are developing,” said Wang. “Our new C200 picking robot is a central technology, as well as our robot shuttle system.” The C200 (pictured above) was launched earlier this year, and is quite different from the company’s other products. Until now, the majority of the robots Geek+ has supplied to the market have been of the low-profile variety, as pictured at the company’s IMHX stand below. Lit Fung, Geek+ overseas business manager, said the company is not limiting itself to the technologies that are currently proving successful.

“We want to continue growing and to offer the market and customers solutions that help their business,” said Fung.

“We are working with partners here in Europe and around the world on building technologies for tomorrow’s industrial world.”