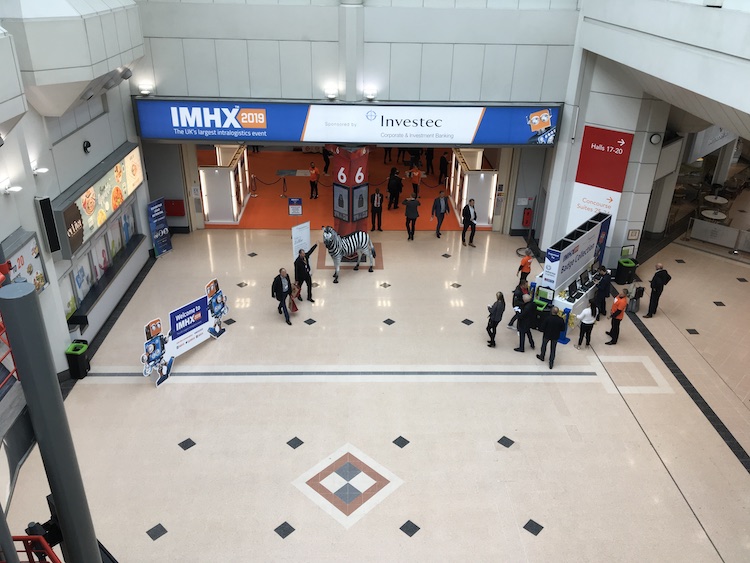 IMHX is one of the largest trade shows aimed at the intralogistics sector in the UK. Held in Birmingham, the event features more than 450 exhibitors and attracts more than 16,000 industry experts over its four-day duration, from September 24th to 27th.

As with the other events Robotics and Automation News has covered over the past year or two, IMHX is seeing an increasing number of robotics and automation solutions sharing the stage with technologies that have been established for a lot longer.

Longer-established technologies can be said to be the ones that brought about “mechanised” automation, which has become more sophisticated over time, integrating electronics and computer technologies into it.

Although there’s probably no clear distinction, “robotic” automation can probably be defined as the point at which mechanical machines become more autonomous.

For example, a typical warehouse robot can find its own way round a warehouse, taking items to and from human workers who usually do the order-picking, and then take itself to the charging station and prepare itself for the next phase of work.

Interestingly, some of these warehouse robots can organise the warehouse in such a way so that items which are “fast-moving” – meaning sell more often – are positioned nearer to the human picker. That is the system design implemented by Geek Plus Robotics (above).

This kind of organisation of the warehouse is computed in the cloud and the decisions are sent periodically – perhaps at the end of each day – to the robots, which do the necessary moving around.

Such computer processing is categorised under “artificial intelligence”, although whether it’s the machine learning branch or deep learning branch is probably debatable.

Other suppliers of autonomous machines at IMHX include 6 River Systems (below) and Locus Robotics. But apart from these three, which are perhaps the best known in the market, there are not all that many more specialist warehouse robotics companies. The vast majority of the companies exhibiting at IMHX are suppliers of what might be called “traditional” technologies, such as conveyors and forklift trucks.

In these ares, too, there have been innovations. For example, although it’s not totally new, conveyors on wheels – demonstrated by a company called Uni-Xu – allow for a degree of flexibility that traditional, fixed conveyors cannot; and Gondola Skate displayed its system for moving large rack systems, which reduces the time it takes to reorganise a warehouse from several days to a few hours.

The largest exhibition stands at IMHX are those of Toyota Material Handling, Doosan Industrial Vehicles, and Dematic. Toyota (above) is probably the world’s leading supplier of forklift trucks, and at IMHX, the company was showcasing the first vehicle to feature lithium-ion batteries positioned around the vehicle, saving significant amounts of space and making the vehicle lighter and more economical because the battery system is said to be more efficient.

Numerous other companies at the event were offering forklifts and heavier machinery. Doosan is showcasing what looked to be the largest vehicle at the show (below), which is not surprising given the company’s background in heavy industry. Dematic, another huge name in logistics and intralogistics, showcased a robotic system for material handling which involved two robots working with a conveyor and packaging system.

In terms of robotics, ABB (below) is showcasing some of the systems which the company has designed for material handling. As well as a single armed robot integrated with a conveyor, the company also had the two-armed collaborative robot YuMi on show. And last but not least, Swisslog (below), a warehouse automation specialist, showcased two of the systems that are central to its robotic offering: one was the AutoStore automated storage and retrieval system, using robotic shuttles, and the other was a Kuka robot serving drinks, which, of course, was among the best things on display at the show. IMHX will continue through until tomorrow.