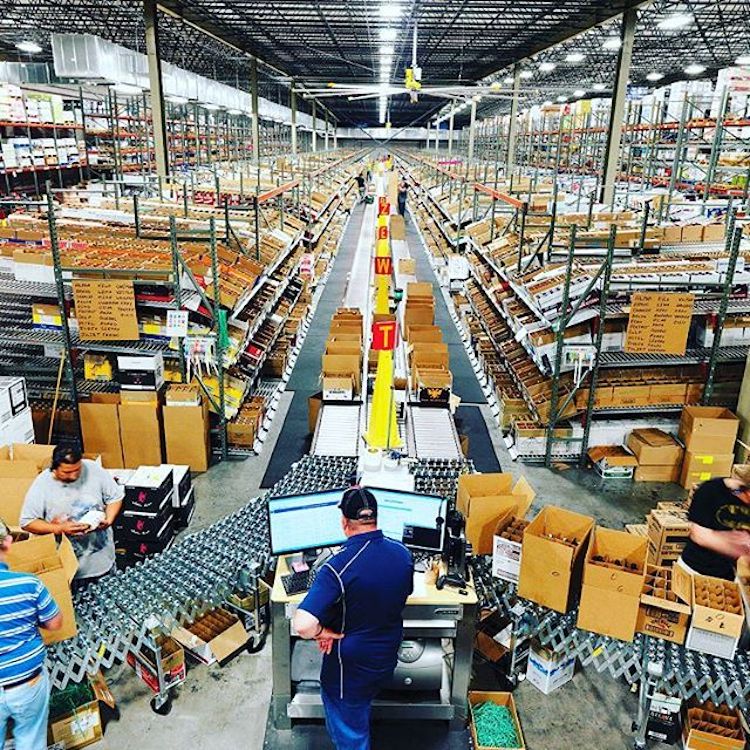 The warehouse is changing. Driven by a shrinking human labour pool and increasing availability of robotics and automation technologies, the warehouse is being transformed from a place full of fixed infrastructure to one where almost everything moves around

Ask anyone to picture a warehouse in their mind and they’ll probably think of lots of storage shelves before they think of anything else.

More than likely, they’ll imagine these shelves are part of fixed infrastructure, and if asked about how the items on these shelves are moved around, they’ll probably say human workers, perhaps with trolleys, then forklifts, and finally maybe, conveyors.

Conveyors would probably be thought of as advanced automation, which it is, but, as a technology, it’s been around a long time. And it’s part of what’s described as “fixed infrastructure”, whereas newer automation systems feature mobility as a central feature, and are often termed “flexible infrastructure”.

Very few people would immediately think of robots before any of the above components of an automated warehouse unless they work in the industry, but most will more than likely know about automated guided vehicles (AGVs) or autonomous mobile robots (AMRs). AGVs are fundamentally different from AMRs, although they are both similar-looking mobile vehicles. AGVs have been in relatively widespread use in industrial operations for at least a decade. AMRs are only now beginning to find a significant market.

AGVs need magnetic rails to be placed on the ground in order to navigate through a warehouse – almost like train tracks. AMRs, meanwhile, need no such fixed navigation infrastructure.

In other words, the hardware of an AMR – wheels, platform, and so on – is developed to a point where it’s difficult to see how it can be improved to do what it already does.

Maybe you could add omnidirectional wheels, longer-lasting batteries, or perch a robotic arm on top, but as an integrated hardware system, an AMR could probably be described as optimal – like road cars, they’re unlikely to change much.

But in terms of computing, the potential for making AMRs more “intelligent” is already beginning to be realised and much more could be done.

AI know the way to go

AMRs can be programmed to position themselves in specific parts of the warehouse depending on how often they will be needed. So, fast-moving goods that need to be taken to the human order-picker more often will be located nearer to the picking station. And items that sell less often will obviously be kept further away.

This kind of thing happens automatically, after initial programming, of course.

Moreover, the AMRs know when to go to the charging point and top up on power – they don’t need to be manually sent or taken there.

These are just two examples of what computing can do. They are being described as “artificial intelligence”, but whatever it’s called, there will probably emerge numerous other innovations which make AMRs even more autonomous.

The idea of integrating a robotic arm with an AMR has been around for a few years, and some companies – including Kuka and Comau – have shown ideas to that effect.

Currently, AMRs can often be seen lifting and moving shelf units, perched on top, as shown in the picture below of a robotic picking system supplied by Geek Plus Robotics. Arm on the move

Geek Plus is also developing an AMR which integrates a robotic arm. It is in talks with at least one of the largest robotic arm suppliers in the world with a view to a partnership on that type of system.

Geek Plus builds and supplies a wide range of warehouse automation systems, most of which include AMRs. They include:

There are plenty of arm manufacturers out there. The ones – like Kuka and Comau – might not want to work with another company to develop a system that are already bringing to the market, but there are many others who have no plans to move in the other direction and build an AMR to go with their arm, so they are likely to be potential partners.

And given that Geek Plus is one of the most successful warehouse automation companies, having sold 7,000 units by March last year, that’s a lot of robotic arms potentially about to be bought.

Geek Plus may opt for a number of non-exclusive partnerships with different robotic arm suppliers, which would make sense because it would enable it to test and refine a variety of systems.

However, robotic hardware and software development is not a trivial or easy task and it may be better to specialise in integrating one or two robotic arm systems.

Whatever the company decides, a number of broader trends in warehouse automation are becoming clear, as outlined below.

Fixed versus flexible: It’s not really accurate to say fixed infrastructure is directly competing with flexible infrastructure because each has its own advantages and disadvantages.

But whereas before there was no real alternative to conveyors and fixed infrastructure if you wanted to automate your warehouse, now mobile robots are offering an alternative which provides an unprecedented degree of flexibility.

Needless to say, fixed infrastructure is not as easy to change as flexible infrastructure. Seasonal sales peaks in some goods, and changes in fashions and tastes, mean that it is often necessary to change the layout of a warehouse, and mobile robots offer an environment which can be frequently reorganised.

Digital supply chain: Data is fundamental to improving processes, and while conveyor-based warehouses collect a lot of information, it’s theoretically possible to gain a more granular level of insight with AMRs because they are not monolithic in the way conveyors are.

The AMR can collect data about exactly how long it takes to move an item from one part of the warehouse to another, and it can be programmed to optimise the route.

Numerous patterns of movement can be monitored and tested with AMRs, which makes it suitable for perhaps smaller warehouse operations with a diverse mix of items.

Artificial intelligence: Some people might not class it as AI, but we would. In our opinion, these warehouse robots are becoming increasingly clever or “smart” as they call it. The navigation aspect is more or less perfect, as is the self-charging aspect.

More sophisticated AI functions – such as vision systems and even voice command response – are likely to be integrated eventually, especially when robotic arms are attached to AMRs.

For the time being, the AMRs are as smart as they need to be, but AI offers an enormous field to grow into.

(Read our white paper, ‘Flexible v Flexible Infrastructure: Warehouses of Today and Tomorrow’, produced in association with Geek Plus Robotics.