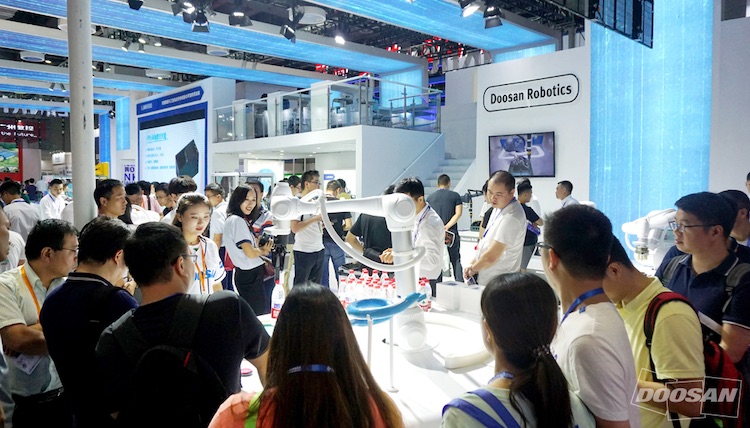 Doosan Robotics has been showcasing the “next generation” of collaborative robots at one of the largest industrial trade fairs in China.

Doosan introduced what the company described as “the world’s most adaptive lineup of collaborative robots”.

Following its launch and positive reception in European and North American markets, Doosan says it is bringing its cobots to meet the “growing demand in the Chinese automation market”.

Doosan’s cobots are designed for a wide variety of customer needs, offering a broad range of capabilities:

The four M Series cobot models, all equipped with six torque sensors in every joint, enable customers to experience advanced cobots offering the industry-leading safety and human-level dexterity in automation.

These cobots have been particularly popular in Germany and the US due to their versatile capabilities as well as their intuitive and easy application.

Byungseo Lee, CEO of Doosan Robotics, says: “We are honored to bring our cobots to China, a strategic ground to many global technology leaders and a hub for Asia’s six-trillion-dollar manufacturing industry.

“Doosan cobots address the need for safe and sophisticated robot colleagues in diverse fields of automation businesses in China – they will maximize productivity and empower humans in various workplaces.”

With its the successful co-operation with its first dealer in China, Linkhou, a Suzhou-based company that specializes in providing core components and parts to the smart manufacturing and industry automation sector, Doosan is actively seeking to expand its network in China to further penetrate and serve the needs of the Chinese automation market.

At both Automate 2019 in the US and Automatica 2018 in Germany, Doosan was recognized for its advanced technology and premium product quality.

The usage of cobots continues to receive attention as they expand to service areas such as helping fry chickens in restaurants and in laundry shops as well as are reliably applied to important manufacturing processes including assembly, pick and place, polishing, gluing, bonding, palletizing and inspection.

Doosan cobots have also received the Red Dot Design Award two years in a row – in the “Interface & User Experience” category in 2017 and the “Product Design” category in 2018.

Doosan plans to continue to expand its global network in Japan and other Asian countries and further solidify its presence in North America, including Canada and Mexico in 2019.