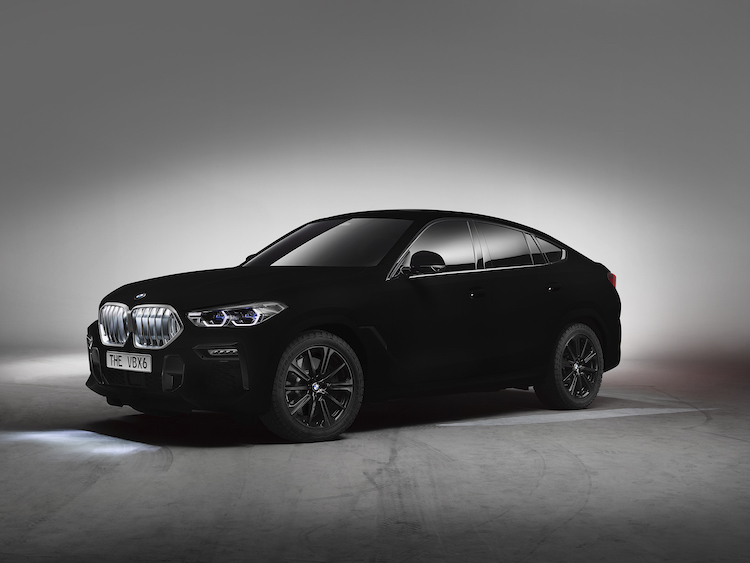 BMW has unveiled what the automaker describes as “the world’s blackest of black” cars, using a coating called “Vantablack”.

The company says Vantablack “highlights the expressive design language and confident, dominant and muscular appearance of the new BMW X6 to perfection”.

Vantablack is the registered trademark for the VBx2 nanostructure paint finish BMW used on the new X6 vehicle.

The name Vantablack has already become synonymous with an entire range of extremely black coatings and paints such as VBx2.

It contains an acronym of the technology enabling this superior black in its first two syllables, which stand for Vertically Aligned Nano Tube Array, a matrix made out of carbon. Each of these carbon nanotubes has a length of 14 to 50 micrometres, with a diameter of 20 nanometres, making it around 5,000 times thinner than a human hair.

As a result, around a billion of these vertically aligned carbon nanotubes fit into one square centimetre.

Any light striking this surface is almost completely absorbed rather than reflected, and effectively converted into heat.

This technology was initially developed for coating space-borne components.

As Vantablack can be applied at temperatures from as low as 430 degrees Celsius, it is suitable for delicate materials such as aluminium, and optical components coated in Vantablack enable observation of faint stars and distant galaxies that stray light from the sun makes difficult to detect.

The first generation of Vantablack introduced by Surrey NanoSystems in 2014 absorbed up to 99.965 per cent of light, almost completely eliminating reflectance and stray light.

Ben Jensen, Vantablack inventor and founder of Surrey NanoSystems, says: “When we were approached by BMW, we were still quite hesitant to begin with. But the new X6 looked so incredibly different that it just felt like a really good fit.

“I think it worked really well on the BMW X6, because of the size of the car, its distinctive shape, and how imposing it is. But putting a paint like that on a conventional car lacking a distinctive design would probably detract from it in some way.”

Jensen says his company was approached by many automakers from the beginning, but adds that developing a Vantablack VBx2 car paint durable enough for daily use remains “a huge technological challenge”.

Hussein Al Attar, creative director automotive design at Designworks and the designer responsible for the new BMW X6, says he first heard about Vantablack a few years ago.

“I’ve been absolutely fascinated with the technology ever since. So, for me personally, this is a big deal,” says Al Attar. “The BMW X6 is the perfect car for this project.”