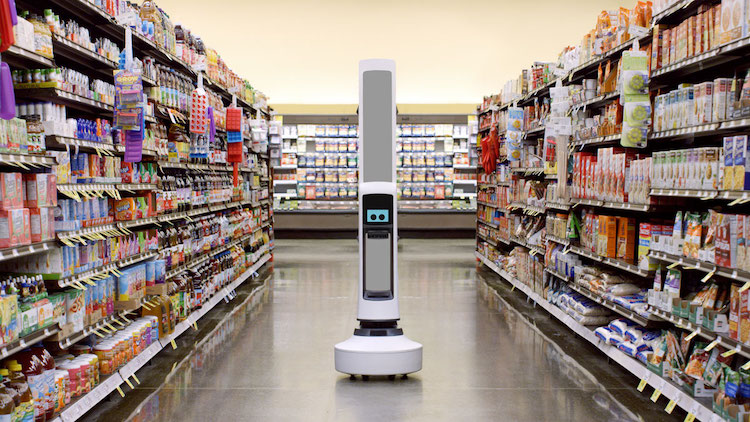 One was a Series A equity financing round, and the other was an inventory financing agreement with SoftBank Robotics.

Simbe says the financing will allow the company to increase efficiencies in production and deployment of its Tally robot.

With the Series A round, three renowned industry experts join Simbe’s governing board of directors, positioning the company to continue scaling global expansion to meet market demand.

With significant validation and backing from premier firms, Simbe will leverage this unique blend of equity and inventory financing to build on the momentum and significant growth the company has experienced to date.

This includes a focus on growing its team, expanding its fleet of Tally robots into new markets, accelerating its deployments with existing partners, and unlocking more value in-store with new capabilities, furthering Simbe’s mission of revitalizing brick-and-mortar retail with e-commerce level insight.

Brad Bogolea, co-founder and CEO of Simbe Robotics, says: “Our investors, both previous and new, provide much more than financial support. They are advocates and trusted advisors who bring invaluable institutional knowledge to all facets of our business.

“Both our equity financing partners and the SoftBank Robotics team are deeply aligned with Simbe’s vision to revitalize physical retail through data. We are at a pivotal time of growth and value their support as we continue to transform retail at a global scale.”

The $26 million Series A was led by Venrock with participation from Future Shape, Valo Ventures, and Activant Capital.

These top-tier investors have a deep understanding of the retail, robotics, and technology industries and will support Simbe with invaluable knowledge and guidance as the company begins a new phase of growth.

The equity capital will go toward business operations including growing the team of world-class talent; scaling sales, marketing and customer success functions; and continued investment in research and development.

David Pakman, partner at Venrock and Simbe board member, says: “The Simbe team is building one of the most interesting datasets in retail, capturing inventory and pricing data that hasn’t been available before.

“With Simbe, retail stores can free up scarce labor to spend more time doing high-value activities like interacting with customers. Retail is changing, and stores must modernize to succeed in today’s environment.

“The Simbe team has impressed me from the start, and they are uniquely equipped to bring this new reality to retail.”

With the close of the Series A financing, three new appointments were made to the board of directors:

“The company’s proven technology and return on investment is improving the bottom lines of well-known grocers and retailers on multiple continents. Now it’s time to scale Simbe’s data and hardware platform to revolutionize many more stores.”

Following the initial success of the partnership, SBR and Simbe will expand their collaboration to include inventory financing, accelerating Simbe’s global deployment of its fully autonomous retail robot, Tally.

The funds will support scaled manufacturing of an additional 1,000 Tally units over the coming two years.

SoftBank Robotics has deployed more than 25,000 robots globally and has the infrastructure in place to support Simbe’s need to scale manufacturing, shipping, deployment, and field services of Tally robots globally.

The investment underscores the need for automation throughout the retail industry and points to the new, blossoming Robotics-as-a-Service (RaaS) model, a model SoftBank Robotics has adopted for the future of automation across multiple industries.

Kass Dawson, head of business strategy at Softbank Robotics, says: “Building on the momentum of our partnership with Simbe and our focus on augmenting the workforce through automation, inventory financing was a natural next step to bring more Tally robots to market, faster.

“The retail space is hungry for autonomous solutions to common pain points, and Simbe has exceeded expectations in designing, building, and deploying Tally robots worldwide.

“The feedback from retail partners and consumers alike has been overwhelmingly positive – which is reflected in retailers’ demand for more Tally units on a global scale.

“Simbe and SoftBank Robotics’ synergistic partnership helps solve that demand and is demonstrative of the types of mutually beneficial partnerships the robotics industry should be moving toward.”

Founded in 2014, Simbe says it has emerged as the leading data-driven inventory solution for physical retailers, with Tally taking the lead as the first fully autonomous robot currently performing multiple store traversals per day – alongside customers during regular hours of operation – and executing a variety of inventory auditing tasks.

Using both computer vision and RFID scanning technology, Tally provides retailers and their global CPG brand partners with actionable, e-commerce-level insights into shelf data up to three times per day.

Simbe optimizes the grocery supply chain, enabling faster operational decisions at the store level and more nimble inventory management between retailers, brands, and logistics providers, and is ultimately building one of the most valuable datasets in the retail ecosystem.

To date, Simbe has installed Tally robots in more than a dozen of the top 250 global retailers in the Americas, Europe, the Middle East, and Asia.

The company says its robots have:

Meanwhile, Simbe, as a company, has expanded its headquarters in south San Francisco to six times the size of previous offices to support its ongoing growth.