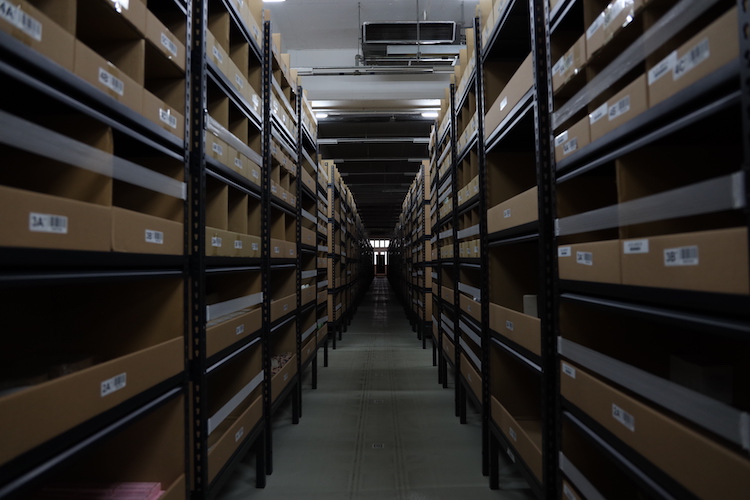 Get more details and statistics by downloading the white paper ‘Flexible v Fixed Infrastructure: The warehouses of today and tomorrow’

Staying in the digital dimension for a moment, if you are planning to establish a warehouse, you are likely going to need to set up your data infrastructure first.

A Local Area Network, or LAN, covers your warehouse and the immediate vicinity, while the Wide Area Network will cover facilities in various locations and connect them all up to the head office, which may be in a separate place altogether.

A warehouse LAN or WAN requires mobile devices to maximise its effectiveness. These devices – which can range from specialist handheld scanning and computing devices to smartphones and tablets – are often used in warehouses for barcode scanning, checking stock, and a variety of things. Increasingly, warehouse managers are equipping their staff with smart glasses which integrate augmented reality, so they can simply look at boxes and items and have the relevant data displayed on the lenses.

However, all that said, what we mean by fixed infrastructure is the basics of a warehouse, the things that most people think of first when they think of a warehouse.

Namely, and ranked by historical appearance:

And while new, flexible infrastructure components – such as moving shelves and autonomous mobile robots – are finding enthusiastic buyers and growing in adoption, they are still a relatively small proportion of the total warehouse market.

The overwhelming majority of warehouses which have any level of mechanisation or automation still use the technologies from the above numbered list and maybe one or two extras – mostly digital, or software-oriented solutions, such as Warehouse Management Systems, or WMS, which has become standard technology for most operations.

But then there are also the huge number of warehouses that do not have any automation at all. In fact, they may not have much mechanisation either, and are largely human-operated.

It is often thought that fixed-infrastructure facilities are suitable for high-volume, fast-moving goods. And this may true, but how long that perception continues to persist remains to be seen.

Time and motion studies may well be done in due course comparing fixed-infrastructure warehouses to flexible warehouses, and it would be interesting to see how they compare in terms of how fast they each are.

For the time being, when a warehouse manager wants to automate their warehouse, they have a choice between fixed or flexible, or a blend of the two, which makes establishing a warehouse that much more interesting.

Flexible infrastructure may not replace fixed infrastructure in every warehouse, but at least it offers an alternative method to the traditional system that’s been around a long time.

Until recent years, the only way to set up a warehouse was to have fixed shelving for storing items and fixed conveyors for moving those items around.

In terms of mobile hardware, there was the forklift truck and the automated guided vehicle, or AGV, which also required magnetic rails to fixed to the floor to enable it to navigate.

These are the main components of a traditional warehouse, but new technology is enabling the establishment of facilities with no fixed infrastructure at all.

Not only can a warehouse now contain no fixed infrastructure, it could also be largely unmanned, with driverless forklift and autonomous mobile robots.

1. System automation: This is typically the computing systems aspect, and includes such things as:

2. Mechanised automation: This can include such things as:

Shelving or racking systems are essential to this method, and most infrastructure tends to be fixed. Exceptions might be forklift trucks and automated guided vehicles.

But AGVs also require magnetic strips to be fixed to the floor to enable it to navigate. As such, AGVs are mainly mechanical and considered to be fundamentally different from autonomous mobile robots, which navigate using lasers and sensors and require no fixed infrastructure.

3. Robotic automation: Without getting into the semantics too much, there are different types of robots for warehouses. They include:

There are numerous other robotic systems that are either already on the market or are currently being developed. The key innovation, however, is not necessarily technical – it’s in the business model.

Recognising that robotics can be expensive, suppliers are increasingly offering their systems in a “robotics-as-a-service” package, which enables them to hire equipment, avoiding large, upfront investment.