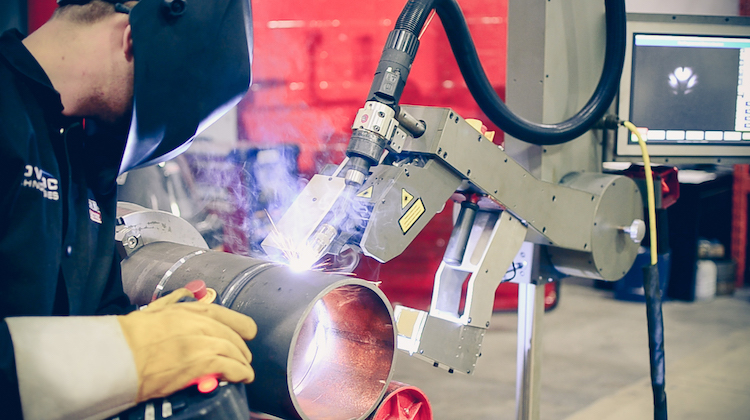 Collaborative robots are working with human welders in manufacturing, according to Canada-based robotics company Novarc Technologies, a company which has built a robot specifically for pipe welding.

Welding is one of the biggest applications for robots, particularly in the automotive industry.

According to the International Federation of Robotics, approximately half of all robotic arms sold in the US are bought by the automotive manufacturing sector, and around one-third of those robots are used for welding.

However, until now, the vast majority of these robots been of the larger variety – the ones that tend to be caged off and are not classed as “collaborative”.

It may have been thought that collaborative robots, which tend to be smaller, are not sturdy enough for welding work. Whatever the reason, this perception is changing.

Novarc provides collaborative robotic systems to the welding industry. The company says its collaborative welding robot is increasing the level of autonomy in the welding process allowing even less experienced welders to just set up the weld with its “Spool Welding Robot”, or SWR, then simply monitor the process and eventually let the robot complete the weld unsupervised from start to finish.

Novarc says its advanced features for pipe welding offer a human scale of precision and dexterity, with an operator-friendly user interface, adaptive control systems for accurate torch control, and machine learning algorithms to detect features and anomalies, allowing for even higher levels of automation.

The SWR also integrates machine learning software which collates task experience “to a degree that no human operator could duplicate”, according to Noravc. The SWR robots will learn over time, from each other and from the operator’s input to eventually reach full autonomy.

Like driving a car, welding by hand is a difficult process that requires years of experience. But unlike driving, welding demands specific, in-depth training and acquired knowledge that is rapidly dying out with the retirement of experienced welders – a whole generation of experience that is not being replaced by younger talent.

The American Welding Society states that the average age of a welder in the US is 54 years old, which will lead to a shortage of 400,000 welders by 2024.

Novarc’s collaborative welding robots are made specifically for the pipe spool welding industry – pipe fabrication shops that build pressure and non-pressure pipes for a number of traditional industries such as shipbuilding, infrastructure, and oil and gas.

The company has experienced considerable growth since the launch of its collaborative Spool Welding Robot a couple of years ago.

Today, 12 Spool Welding Robots are in operation around the world, and recently the company expanded its North American operations into the global market through a partnership with Abicor Binzel, the world’s leading manufacturer of manual welding equipment and robotics welding torches and accessories for medium and high automation production.

Recently, Novarc received the 2019 Technology Innovation Award at the Excellence in Technology Awards presented by the BC Tech Association.