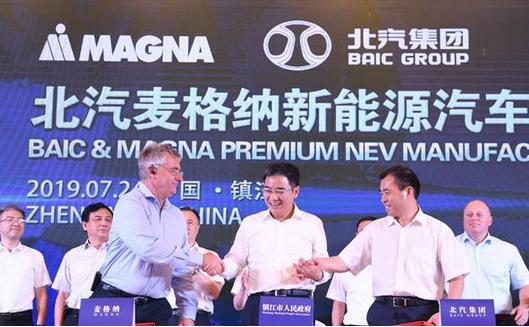 Magna, BAIC Group and the Zhenjiang government celebrated the signing of a framework agreement governing their electric vehicle manufacturing joint venture in Zhenjiang, China, which marks another milestone of their continued cooperation.

The transaction, which is pending regulatory approval and other closing conditions, is expected to close in the fourth quarter of 2019.

The joint venture, which is to be controlled by an affiliate of the BAIC Group, is Magna’s first investment in a complete vehicle manufacturing facility outside Europe.

It will combine Magna’s vehicle engineering and manufacturing expertise and BAIC’s local manufacturing, marketing and distribution footprint to support electric mobility in China. The facility has the capacity of up to 180,000 vehicles per year.

In June 2018, Magna and BJEV announced they would jointly engineer and build premium electric vehicles for customers in China.

In January 2019, the two sides celebrated the opening of a new engineering centre and announced the groundbreaking of a new NEV test centre in Zhenjiang.

The first production of electric vehicles, BJEV’s ARCFOX models, is expected for launch in late 2020. The joint venture will also be capable of offering EV contract manufacturing services to other potential customers.