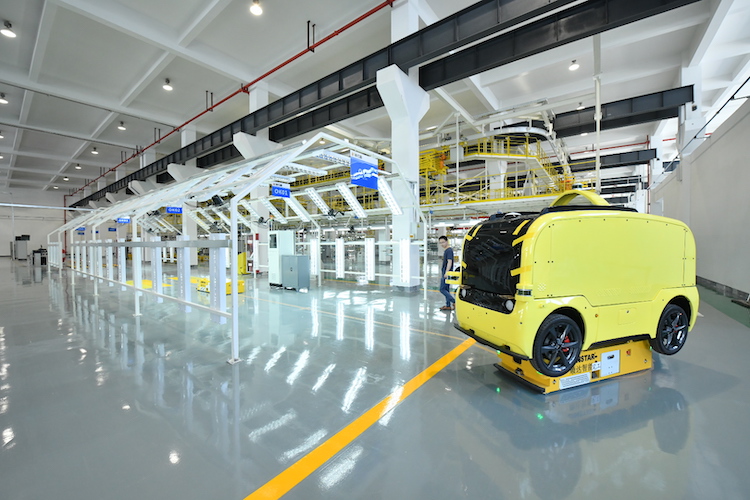 Neolix, a maker of small autonomous delivery vehicles, has laid the foundation stone to mark the start of building a factory for manufacturing driverless vehicles.

The company says the new facility in Changzhou will be the first unmanned vehicle mass-production base in the region, and possibly the world.

The plant will produce vehicles which have “Level 4” autonomation, which is described as “full autonomy with human driver” by the SAE.
The SAE is an international engineering association which has published a scale of automation that goes from Level 0 for “no automation, just mechanical”, to Level 5, which is “full automation, not requiring human driver”.

Neolix recently held the launch ceremony to place the new stone at the Neolix Autonomous Driving Manufacturing Plant – Changzhou, which is located in Changzhou’s Wujin High-tech Zone. It is reported that the plant has “the world’s first L4 unmanned intelligent production line, with an annual production capacity of more than 30,000”.

Up to now, Neolix has produced more than 120 unmanned vehicles, and the cumulative automatic driving mileage has exceeded 500,000 kilometers.

The new generation of Neolix products SLV11 can be achieved without the need for security personnel to follow, says the company.

Neolix claims to be the only research and development company in the world that can deliver L4 unmanned vehicles – or “car-class” – products.

The company has accumulated more than 10 years’ experience in building intelligent hardware in the logistics industry, integrating the ability of car-level production.

The Neolix unmanned vehicle is equipped with an L4-class automatic driving system, a car network AI platform, a car-grade chassis, a power-changing system, and a modular smart car.

The second generation of the SL11 features a richer sensor configuration that allows the unmanned vehicle to maintain its ability to drive automatically “without the need for a safety officer to follow”, which is a practice in China.

The new Changzhou Zhizhi Factory has a total construction area of ​​13,600 square meters. The upper and lower floors of the workshop are 5,860 square meters per floor.

Yu Enyuan, founder and CEO of Neolix, says that the unmanned vehicle is “a computer on four wheels”, adding that Neolix is “committed to developing and moving to the future, mobile smart terminals and mass production”.

“In the field of unmanned vehicles, the Neolix tools are deeply developed and continuously ignited by the fire of the stars.”