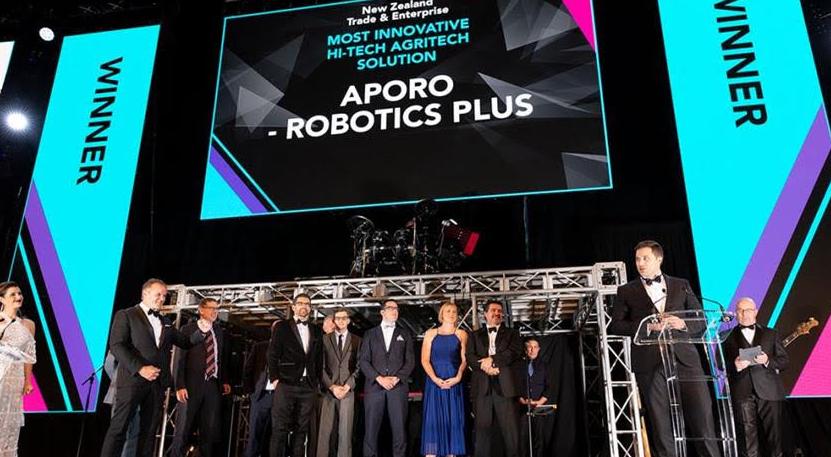 The awards capped off a successful 12 months for Robotics Plus, which included the launch of its first commercial products and an investment of $US8M from partner Yamaha Motor Co. Ltd. (Japan), to bring its total investment to $US10M.

Robotics Plus’ award winning robotic Āporo apple packers, commercially launched in May 2018, identifies and safely place up to 120 apples per minute in display trays.

The technology is being marketed by Global Pac Technologies, a Jenkins Group (NZ/Australia) and Van Doren Sales (US) joint venture, and is already operating in packhouses in New Zealand and the USA, with Europe to follow.

Steve Saunders, Co-Founder and Chairman of Robotics Plus, says: “It’s an absolute honour for the team to be recognised with these awards, which recognise the dedication of our staff, partners and supporters.

“We share a commitment to help industry meet the challenges of feeding the world in a sustainable way assisted by smart automation and intelligent robotics.”

Dr Matt Glenn, CEO of Robotics Plus, says: “It’s been a pivotal year for Robotics Plus. We’re working on a very ambitious growth plan, with the support of local and international partners such as Global Pac Technologies, ISO Limited, Trimax and Yamaha Motor, who are helping us scale quickly to achieve this.”

“We’re thrilled that over the past 12 months Robotics Plus has launched its first two commercial products. It was fantastic to be in New Zealand with Robotics Plus to see their success recognised at the country’s most prestigious technology event.”

“It was very apt that the Māori Company of the Year was supported by Callaghan Innovation and the Hi-Tech Agritech award was supported by New Zealand Trade & Enterprise (NZTE), as these New Zealand Government agencies have been very supportive of our growth and innovation plans, along with MBIE, MPI and TPK.”

Robotics Plus has a range of technologies under development to address major issues in the horticulture industry caused by labour shortages and increasing consumer demand for fresh fruit, include: an autonomous agricultural vehicle, robotic pollinator, robotic harvesters, crop estimator, and a number of confidential projects.

Earlier this month Robotics Plus launched its second commercial innovation, an industry-changing Robotic Scaling Machines (RSM) which give a faster, safer and more accurate measure of logs on the trucks and trailers than the manual process.