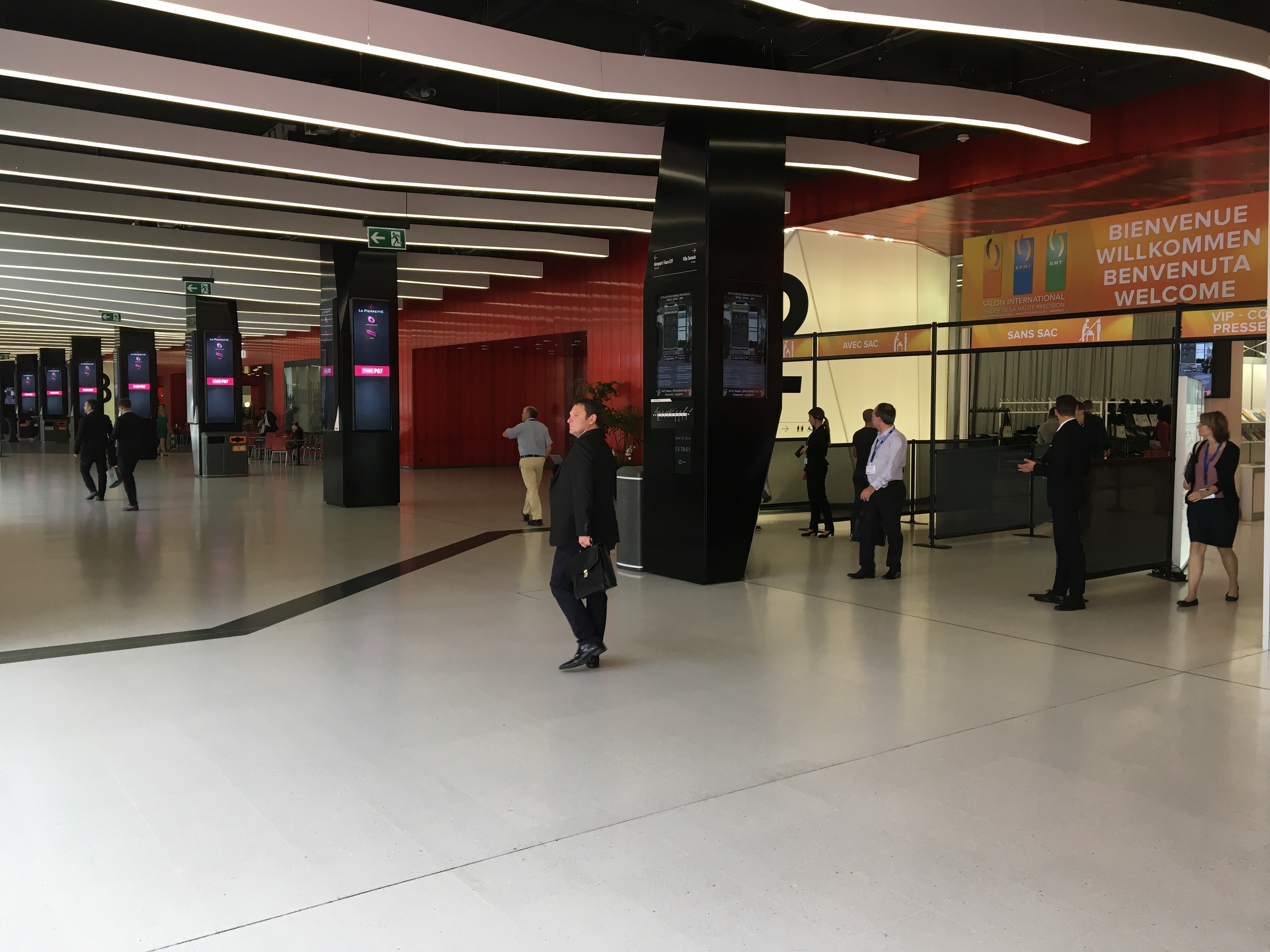 It might have an inexplicably complex name, but the EPHJ-EPMT-SMT event, which just got under way today in Geneva, is a trade show about what is, arguably, one of the simplest forms of technology.

By “simplest”, I mean it’s about mechanical technology – gears, springs, and so on – almost exclusively, with computer technology playing a very small part, if at all. And it’s all about small-scale.

Certainly the watchmaking aspect of the show is almost entirely about mechanical timepieces. The jewellery-making strand also features mechanised equipment. And the medical technology side, while requiring computing in some areas, is also mostly about mechanical equipment.

It probably wouldn’t help much to explain what all those letters in the name stand for, but the three business sectors EPHJ-EPMT-SMT highlights are:

And as someone who has had a lifelong fascination with the internal workings of mechanical watches, as well as micro-mechanical technology of various kinds, this was an event I have wanted to visit for a few years. Ever since the time, about 10 years ago, when I fell asleep with a laptop computer on my bed, with the power lead plugged in, I’ve been very wary of electricity coming into contact with, or being anywhere near, my body.

I woke up with my whole body feeling limp and soft all over, every muscle and joint. It wasn’t a healthy feeling. Those were just the effects I could notice – external things. The negative effects would have been internal as well.

That’s not the only example I could give of electricity worrying me, and I’m sure many of you reading this have experienced that static charge that leaves an invisible blister on your finger when you go to open a door with a metal handle or something like that.

So, partly because of these things, I’ve always favoured mechanical watches. Yes, I do wear a watch with a tiny battery inside it, which is electric, of course, but that’s my self-imposed limit on the amount of electricity I will allow on my body.

I would not, for example, wear a “smart watch”, like the ones Apple has popularised if not pioneered. Neither would I wear any of the new generation of “smart clothes”, which may have microprocessors, microcontrollers, and all kinds of sensors integrated into them.

I appreciate these new technologies, but the electrical power needed to run them is probably too high for me to accept. I’m not sure, but I’m guessing they are. They would certainly require more power than they would get from my watch battery, which is likely to keep my watch ticking for at least a year.

True, the human body is primarily electric, but that’s a “natural” electricity that we need in order to continue living – can’t do without it.

It’s the “unnatural” electricity I worry about, the extraneous stuff, produced in power plants and intravenously fed into modern society, economy and all kinds of technologies. Apple has reportedly said that it currently sells more watches than the whole of Switzerland, a country which, as everyone probably knows, is synonymous with watches.

To say that the tech giant’s smart watch is “popular” would be the understatement of the century. Closer to the truth, it’s a phenomenon, much like the iPhone in its early days.

Many other companies have followed Apple’s lead and produced smart watches of their own, and the market could be said to be “burgeoning” or even “nascent”, even though sales in the aggregate are colossal.

Switzerland stills sells a lot of watches, but the reason why the industry has been able to survive is because mechanical watches tend to fetch very high prices.

They tend to be seen as luxury items, made by famous names, on a par with the haute couture fashion houses of Milan and Paris.

Whether this business model can be sustained is an interesting question. Judging by the high-fashion industry, it probably can.

But the Swiss have also made watches more accessible, at a lower cost, using innovative manufacturing methods which integrate a vast amount of robotics and automation technologies.

The Swatch brand – short for Swiss watch – is an amalgamation of the leading watch making companies in the country, and has been developing ever-more sophisticated ways of producing high-quality watches using high-precision automation methods.

After almost losing the watch-making industry completely to the Japanese during the 1960s and ’70s, Swatch is what the Swiss needed to save what was left of what is, nonetheless, a decimated sector.

Now, however, there is the new threat of smart watches.

How will Swiss watchmakers respond?

It seems they have, reluctantly perhaps, embraced the new technology, and started making smart watches of their own. Many of the high-end brand names have launched, or are developing, smart watch models of their own.

But to use an irresistible pun, only time will tell if the Swiss can do what they did with Swatch and retain their prominent place in the global watchmaking landscape. That tongue-twister of a name again

So, it is against the background of many interesting and global trends that I am visiting what some might consider a niche or even obscure industry event, EPHJ-EPMT-SMT.

But after being here for a few hours, with the rest of the day to go, I would estimate that at least 2,000 or visitors are here, and many hundreds of exhibitors, not least interesting of which are robotics companies such as Stäubli, and Mecademic – albeit the latter one through various integrators and distributors.

Held at the PalExpo centre, right next to Geneva airport, in Switzerland, obviously, EPHJ claims to be the world’s only exhibition about micro-technology, referring to equipment used to make small things like watches, jewellery and medical instruments. Almost all of it is mechanical, as mentioned earlier.

Many people are simply fascinated with watches, and this mindless enjoyment is what provides the foundation for this industry.

And having taken several fairly expensive mechanical watches apart in my childhood, just to see what the inner workings looked like, I think I understand the fascination.

I found the tiny movements inside a watch quite mesmerising, and that fascination has endured to this day. Moreover, when I tinkered with a watch when I was a child, I realised that I could adjust how fast or slow the watch hands would turn. It made me realise how interesting watch-making would be.

I also realised I could see the actual movement of a minute hand if I concentrated on it long enough. I didn’t have the patience to do the same with the hour hand. But that would take us down a different direction of zen-like trance states or whatever.

Digital watches probably have a similar fascination for the younger generations, who seem to understand circuit boards a lot better than I could, or would want to.

But the unfortunate aspect, in my opinion at least, about new technology is that it’s mostly about things you can’t see move with your eyes. It’s all imperceptible photons of light, travelling inside tiny chips and whatnot.

It would probably interest me if I understood it better, so I thought I’d ask some experts in micro-technology attending EPHJ what’s interesting about new technology and how it compares in terms of interest value with traditional technology, even though they’re probably the wrong people to ask.

Anyway, I’ll also ask them about how robotics and automation is used in watch-making, jewellery-making and medical technologies.

Visit our website again tomorrow for another report from EPHJ, in Geneva, Switzerland, obviously.