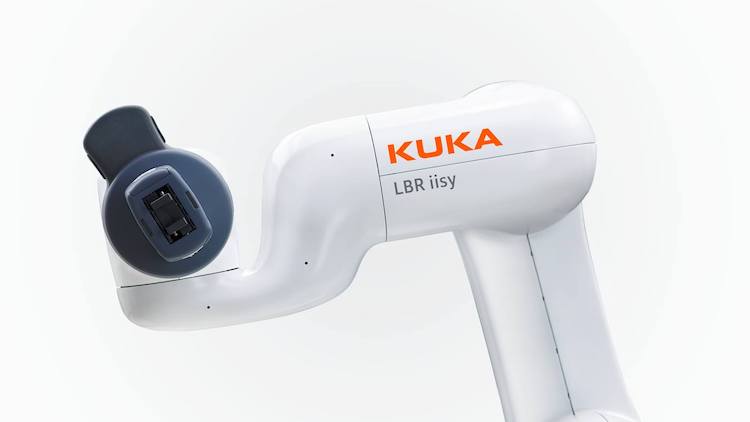 Kuka has won some notable awards at iF, one of the world’s most prestigious design awards events.

The company also won at the German Design Awards.

Kuka celebrated the success by announcing its line-up of products is “convincing from start to finish”.

The Kuka LBR iisy, which is a small industrial collaborative robotic arm, and the Kuka KMP 1500, an autonomous mobile robot, both received the renowned iF Design Award 2019.

The German Design Awards 2019 went to the Kuka smartPad, Kuka Agilus (pictured below), a compact industrial robotic arm, and LBR iisy, which even managed to garner two of the coveted awards. The Cobot LBR iisy (main picture) is a sensitive, precise and easy to operate robot that makes automation even more intuitive and opens up new application possibilities for human-robot collaboration.

The LBR iisy made an impression with its aesthetic, clear design with high recognition value, winning both the iF Design Award and the German Design Award.

The omnidirectional mobile platform KMP 1500 offers modular and versatile production concepts for the industry of the future.

With a payload capacity up to 1,500 kg and an integrated safety laser scanner, the KMP 1500 moves the products safely and autonomously throughout the entire production process and is the answer to the increasing demand of production departments for shorter response times and greater flexibility, says Kuka. The compact six-axis robot KR Agilus is designed for particularly high working speeds and is distinguished by a variety of different versions, installation positions, reaches and payloads.

The robot was able to convince the jury as well with its diverse and dynamic performance. With fewer materials being used, the robot’s lightweight structure and natural motions are emphasized.

The Kuka smartPad finds its niche

The Kuka smartPad was already the winner of two design awards in 2018 and took home one of the coveted prizes again this year.

The crucial factor was the product’s ergonomic, compact design, which is nevertheless extremely robust and thus ideally prepared for tasks in a harsh industrial environment.

The iF Design Award is one of the world’s most important design prizes and has been presented annually since 1954. An international jury consisting of 67 design experts selects the winner from over 5,000 entries and 70 countries.

The German Design Award was established in 2011, and has highlighted innovative products and projects, as well as their manufacturers and creators, as judged by an international jury.