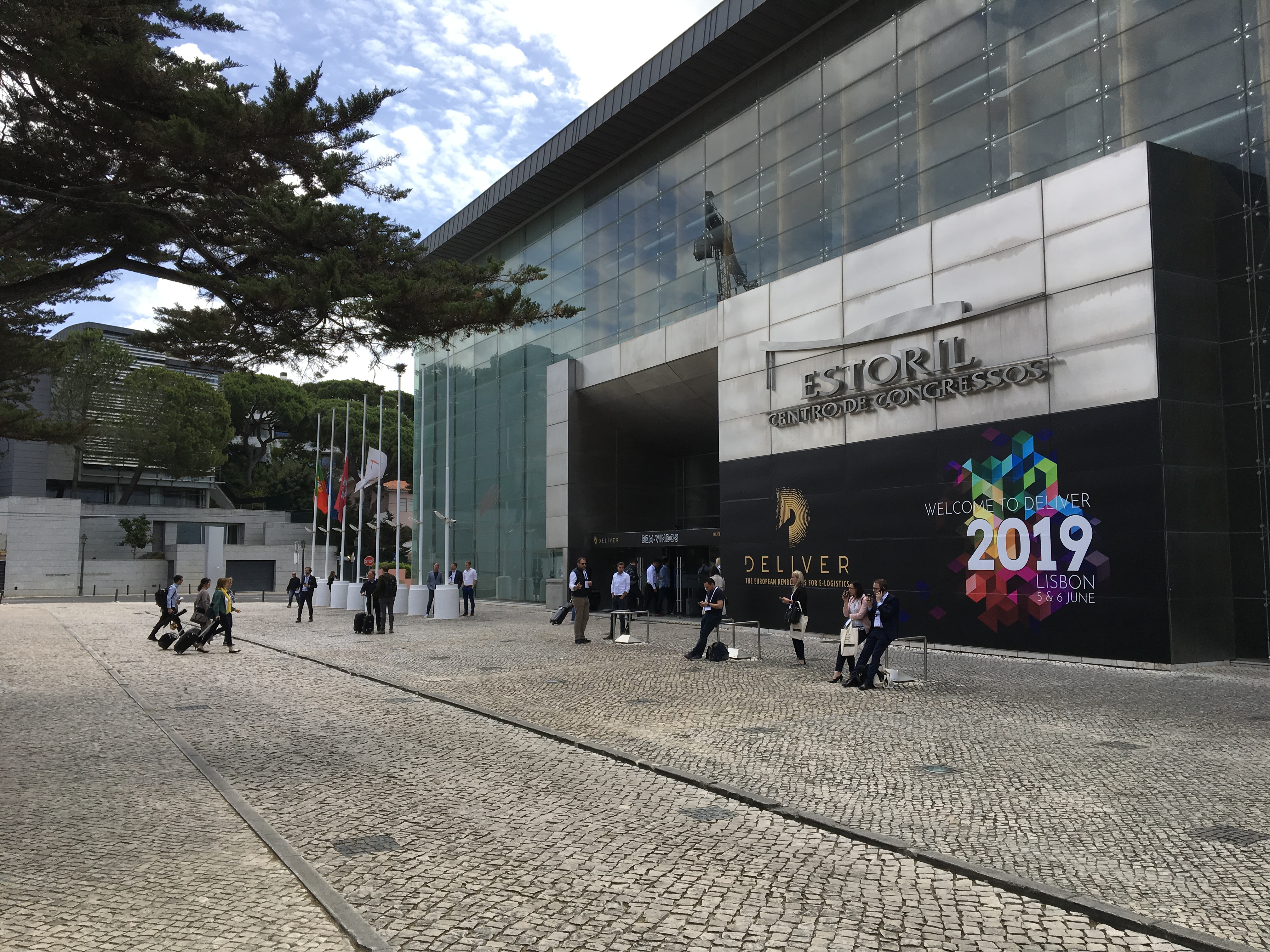 The Portuguese capital city of Lisbon is playing host to one of the most important events in the e-commerce logistics and supply chain industry, Deliver.

Some describe Deliver as the “Davos of e-commerce” because it attracts all the most important e-commerce companies as well as the companies which provide the technology they rely on.

And that’s why we’re here.

E-commerce companies are increasingly dependent on technologies such as conveyors, automated storage and retrieval systems, robots, and even artificial intelligence to gain a competitive edge over their rivals.

And in such a competitive market with relatively low margins, any slim advantage is fought for as though the survival of the business depends on it. The organisers of Deliver try to tailor each event to a local audience, whether it is held in London, which we also covered, or Lisbon, where it is this time.

Among the more well-known companies at this Lisbon edition are DPD, one of whose representatives claimed that the company is now second only to DHL in terms of the number of parcels delivered.

“DPD delivers 5 million parcels a day across Europe,” he said. “More than everyone else except DHL.”

Companies like DPD, DHL, FedEx and others depend on warehouses being superfast in their handling of material, whether it’s loading and unloading lorries, storage and retrieval, organisation of the items, and order picking.

Order picking – the choosing of individual items and the placement of those items in one order for a customer who may have picked a wide range of completely different items – is something that is still done by a human.

Traditionally, a human picker will stand at a “picking station” or point, located somewhere on alongside a conveyor, and they pick individual items out of boxes that pass by.

The items the human picker picks are placed in a separate box or bag ready for dispatch to the end customer.

It may sound like a simple job, but the complexity of it has so far eluded roboticists and automation experts. Robots cannot yet be relied on to pick out the right items and pack them in the right way, although much progress has been made in this area.

For now, however, the human picker retains his or her place at the picking station, and it is all the technology surrounding them that is changing.

One of the most fundamental changes is the way the warehouse is operated – essentially, whether it uses a conveyor, which is fixed infrastructure, or robots, which are usually part of a flexible infrastructure.

Conveyors tend to be favoured for the largest warehouses and projects, ones where many millions of items may be being processed. The conveyor system’s main advantage is its speed and cost-effectiveness if the volume is high.

However, the largest integrators are unable to keep up with the demand from the e-commerce sector, which has provided opportunities for warehouse robot makers such as Quicktron, Geek Plus Robotics, and many others. “The large integrators are concentrating on jobs that are valued at tens of millions of dollars, and are actually turning down small- and medium-sized projects that might be worth half a million to a million,” said an executive from Geek Plus.

“This creates an opportunity for a company like ours to offer scalable automation that small- and medium-sized businesses can afford.

“They can start with one or two robots and keep their operation flexible, with no costly fixed infrastructure and no expensive responses to market changes.

“What’s really interesting to me now is how artificial intelligence enables the robots to organise the warehouse so that the goods that sell better are located nearer to the picking station, and that reorganisation is ongoing.

“You could call it ‘seasonal’, but really it’s something that happens every day.

“The other advantage of a robot-based warehouse is that it’s like a parallel circuit or system, wherein if one part slows down or stops, it doesn’t any of the other parts.

“If one part of a conveyor system goes wrong or stops, the whole warehouse stops.”

But whether it’s robots or conveyors, the central job in the warehouse – the picking – is still done by a human.

And while much research and development work is aimed at automating the picking part of the supply chain’s operation, it seems a job that almost any human can do with consummate ease is just too complicated for a robot, no matter how much deep learning or machine learning or AI it’s got.

Another of the interesting innovations we reported on in a previous article about Deliver was the emergence of a special type of machine which can take raw cardboard and fashion it into a box that is just right for the product it is dealing with – no matter how different the sizes and shapes.

This has obvious implications for space-saving and economising on raw materials. At the moment, very often, goods can arrive in oversized boxes in which more than half of the space is wasted.

Amazon is reported to be trialling these types of box-makers, and it’s very likely that they will become more widespread in the sector.

Amazon is reported the be trialling custom box-making machines from a company called CMC. The other company we profiled is called NeoPost. It’s worth bearing in mind that not only can these machines make boxes for individual products, they can also make boxes within which several other boxes can be fitted – meaning a customer order made up of many individual items.

At this Deliver event in Lisbon, one of the companies which is highlighting this technology is called Smurfit Kappa, said to be one of the leading providers of paper-based packaging in the world.

An executive of the company told us that although custom or “on-demand” packaging is currently a relatively small proportion of the overall packaging market, it is likely to grow fast.

Another exhibitor which describes itself as a “customer-specific packaging” company is DS Smith.

We’ll keep a lookout for similar innovations this time at Deliver in Lisbon, which is taking place today and tomorrow. And we’ll keep you posted.