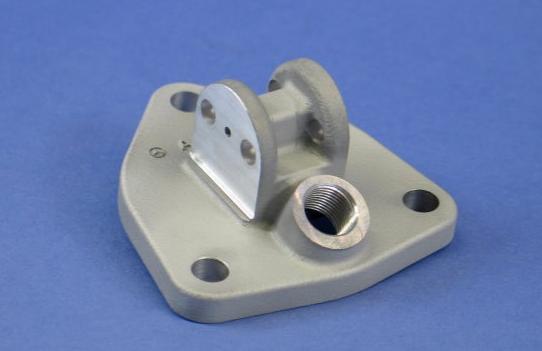 The “NextGenAM” project, what began as a vision in May 2017, has now reached a successful conclusion.

The aim was to develop a digitalised next-generation manufacturing line to produce aluminium components for the automotive and aerospace sectors significantly more cost-effectively than is currently possible.

The successful outcome was that, in terms of the overall production process, manufacturing costs could be reduced by up to 50 percent compared with existing 3D printing systems.

The partners, Premium Aerotec, EOS and Daimler, will now work on the development of a pilot production line for a next-generation automated Additive Manufacturing process.

“As far as the aircraft industry is concerned, Premium Aerotec is today already an international pioneer in the field of metallic 3D printing,” said Dr Thomas Ehm, Chairman of the Executive Board of Premium
Aerotec.

“The aim now is to build further on this expertise and to bring it to bear in other sectors as well. The successful conclusion of NextGenAM thus represents another important building block in our strategy.”

The secret lies in an ingenious and scalable additive production chain, which is fully automated right through to the point where the printed parts are mechanically sawn off the build platform.

This means that no manual work is now required at any stage of the process, from the data preparation and central powder supply through to the AM build process itself and including heat treatment, quality assurance and separation of the components from the build platform.

The technical heart of the system is the EOS M 400-4 four-laser system for industrial 3D printing using metal materials.

A driverless transport system and robots ensure the smooth movement of the parts through every stage of the production line.

The entire production process runs itself, without operating personnel, from a central, autonomous control station. Fundamental to the system is the way all the machines used are networked.

The order data are transmitted to the control station, which then prioritises the various build requests and allocates them to an AM system.

During the build process, the manufacturing status can also be retrieved on a mobile device, independent of location.

Once the full production chain has been completed, the quality reports are sent back centrally to the control station.

All the data necessary for the production of a digital “twin” can be accessed here, so allowing complete traceability, amongst other things.

The manufacturing process is completely scalable: the production lines can simply be duplicated to extend the capacity of the plant.

Today, the pilot facility is already capable of the automated manufacturing of components to series-production quality standards.

The 3D printing process is particularly useful in the replacement part sector since, in the event of a tool problem, infrequently required parts can often be reproduced more cost-effectively than with conventional sand or pressure casting processes.

The first requests for 3D-printed replacement bus parts in aluminium are currently being examined at the Centre of Competence for 3D printing at Daimler Buses.