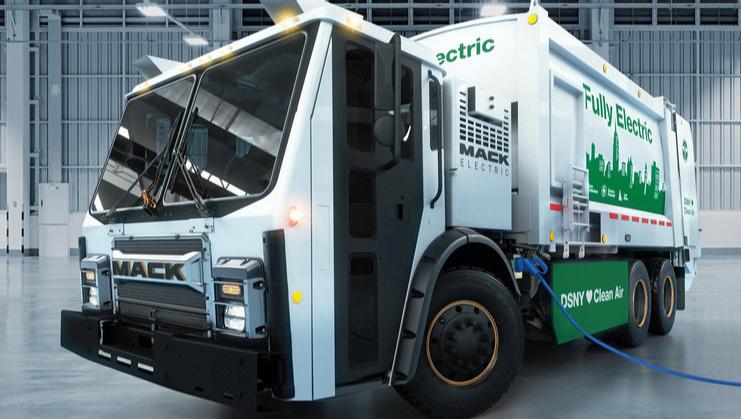 Combining the refuse industry-leading design of the Mack LR model with a fully electric Mack drivetrain, the demonstration model will begin real-world testing in 2020 in the New York City Department of Sanitation (DSNY).

Power is sent through a two-speed Mack Powershift transmission and put to the ground by Mack’s proprietary S522R 52,000-lb. rear axles.

All of the LR BEV’s accessories, including the hydraulic systems for the Heil DuraPack 5000 body, are electrically driven through 12V, 24V and 600V circuits.

As one of Mack’s largest customers, DSNY was an ideal choice to test the first LR BEV model in a real-world application.

DSNY is the world’s largest sanitation department, with its 10,000 employees collecting more than 12,000 tons of refuse and recyclables each day.

Even as electromobility technology and supporting infrastructure continues to develop, refuse and recycling collection represents an ideal application for BEVs because of the potential to deliver the most value to customers.

Collection vehicles operate on predetermined routes and return home every off shift, helping eliminate concerns about range and finding a location to charge.

The frequent starts and stops, which can occur thousands of times per shift, also provide a significant regenerative braking opportunity to recapture energy.

Fully electric trucks like the Mack LR BEV provide a number of benefits, including zero emissions and the potential for improved environmental sustainability.