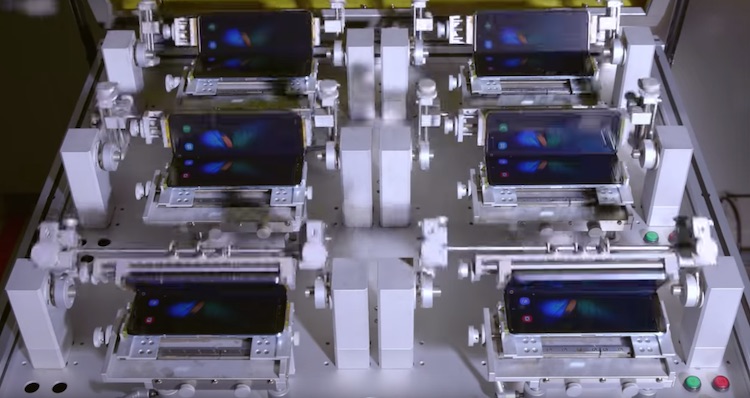 Samsung has been showing off the robot the company uses to test the new Galaxy Fold smartphone. (See video below.)

The Galaxy Fold is a new type of smartphone – the main feature being the foldable screen.

The Galaxy Fold was scheduled for release a few days ago, but early reviews suggested that the foldable screen broke after a day’s use.

So Samsung delayed the launch and has yet to set a new date for the actual launch.

The company has not revealed how many people ordered the device in advance.

Samsung did, however, release a statement in response to the breakages in reviews.

It said: “While many reviewers shared with us the vast potential they see, some also showed us how the device needs further improvements that could ensure the best possible user experience.

“To fully evaluate this feedback and run further internal tests, we have decided to delay the release of the Galaxy Fold. We plan to announce the release date in the coming weeks.”

Moreover, Samsung says it subjected the device to several rounds of extensive tests in its state-of-the-art reliability labs to make sure that the Galaxy Fold is ready to come to market.

Naturally, given the smartphone’s design, a Folding Test was a pivotal part of the Galaxy Fold’s durability assessment.

This test, which examines whether the Galaxy Fold can outlast 200,000 folds and unfolds – or around five years of use, if used 100 times a day – takes a full week to complete.

While the extent of the test may seem like overkill to some, Samsung says it viewed it as “vital to ensuring the durability of device’s hinged design and Infinity Flex Display”.

The company also released a video showing how the Galaxy Fold is evaluated through its robotic testing process.