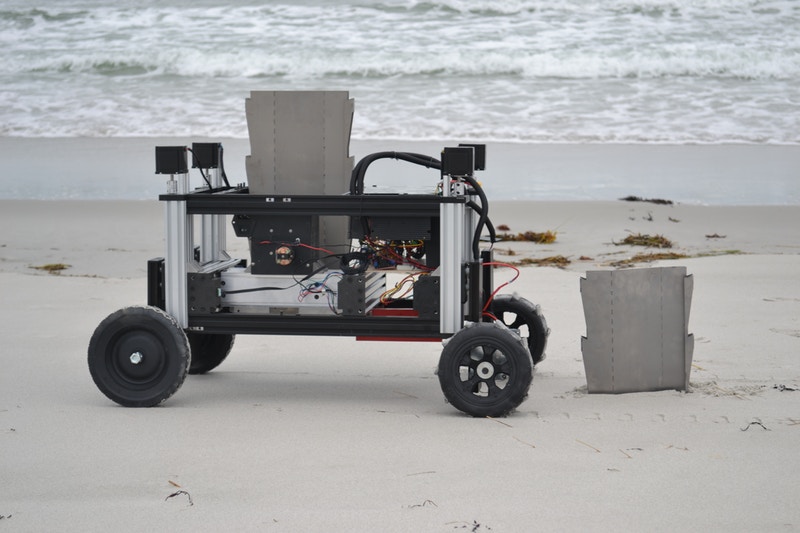 Harvard’s Wyss Institute has unveiled a robot that can build walls. The university says the idea is to have the robot build barriers against floods, among other things. (See video below.)

In a blog post, the Wyss Institute says the robot that can “autonomously drive interlocking steel sheet piles into soil”.

The structures that the robots builds “could function as retaining walls or check dams for erosion control”, it adds.

The robot has been named “Romu”, and grew out of previous work at the Wyss Institute on teams or swarms of robots for construction applications.

The researchers behind the development include Radhika Nagpal, Justin Werfel, and Nathan Melenbronk.

“The name Terramanus ferromurus (Romu) is a nod to the concept of ‘machine ecology’ in which autonomous systems can be introduced into natural environments as new participants, taking specific actions to complement and promote human environmental stewardship,” says Melenbrink.

He adds: “This kind of demonstration can be an icebreaker for a broader conversation around opportunities for automation in construction and land management.

“We’re interested in engaging with experts in related fields who might see potential benefit for the kind of automated interventions we’re developing.”

Werfel says: “The swarm approach gives advantages like speedup through parallelism, robustness to the loss of individual robots, and scalability for large teams.

“By responding in real-time to the conditions they actually encounter as they work, the robots can adapt to unexpected or changing situations, without needing to rely on a lot of supporting infrastructure for abilities like site surveying, communication, or localization.”

Donald Ingber, Wyss Institute founding director, says: “This sheet pile driving robot with its demonstrated ability to perform in a natural setting signals a path on which the Wyss Institute’s robotics and swarm robotics capabilities can be brought to bear on both natural and man-made environments where conventional machinery, manpower limitations, or cost is inadequate to prevent often disastrous consequences.

“This robot also could address disaster situations where walling off dangerous chemical spills or released radioactive fluids makes it difficult or impossible for humans to intervene.”