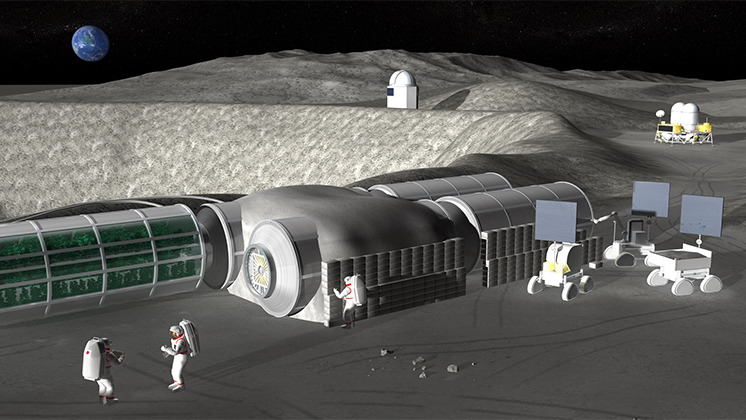 The Japanese Aerospace and Exploration Agency is planning to send robots to the moon and remote-control them to build a lunar base.

Jaxa is partnering with Kajima Corporation, one of Japans oldest and largest construction companies, to promote research and development on the remote construction system by coordination of remote and automatic control.

The project got started in 2016 with the participation of educational establishments including Shibaura Institute of Technology, the University of Electro-Communications and Kyoto University.

Tests have already been conducted at the Kajima Seisho Experiment Site of “two kinds of automated construction functionality”, which have “produced some results”, says Jaxa.

Jaxa says remote control is “a feasible method to build a human base off of Earth, on the moon and Mars in the future”.

The delay in sending any command to construction machinery from Earth has been an issue, however, along with other problems, such as productivity and efficiency, says Jaxa.

On Earth, too, the same technologies are in need to deal with a predicted shortage of adept human resources in the construction industry, which has conventionally been human labor oriented.

The solution might be what is described as a “construction production system to automate machinery”, developed by Kajima, called “A4CSEL”, which has been in development since 2015.

The current research of the five groups – Jaxa, Kajima, and three universities – is aimed at establishing A4CSEL as the method to realize the remote construction functionality in space by coordination of remote and automatic control.

Jaxa says the remote, autonomous control system to build a human lunar base will require the following four steps:

A seven-ton class earth mover has been modified with onboard survey instruments and an automatic operation control console.

The instruments that the tractor and backhoe are installed with autonomously measure the position and direction of its own, making it both remotely and automatically operable.

In addition to full automation, the research is designed to acquire the following to establish remote construction functionality by coordination of remote and automatic control:

Various commands have been executed – the routine operation is repeated, driving over specified distances is automated, and operations requiring fine-tuning are controlled remotely.

The operational process has shown the feasibility of the unmanned technologies to build a lunar base.

Research and development continue to advance the obtained results and to improve the functions and performance of the system.

In the future, says Jaxa, practical technologies are to be sought for to estimate the position on the Moon and Mars where Global Navigation Satellite System is unavailable, and to precisely recognize and navigate terrains, and to ensure the system stability in the uncertain cosmic communication environment.