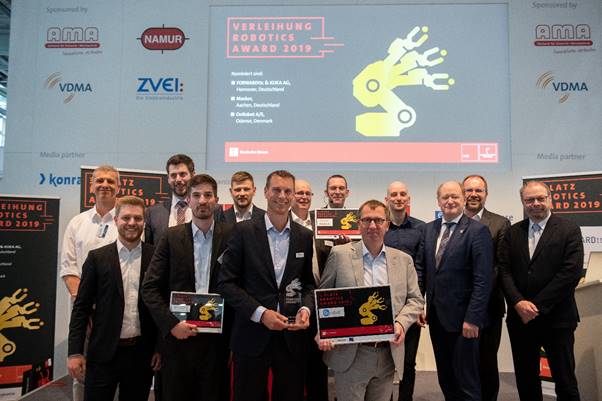 The win comes hot on the heels of the Gecko Gripper winning the Robotics Award at the Hannover Messe in Germany two days earlier.

OnRobot says its gripper is set to “revolutionise manufacturing” because of its ability to attach and lift any kind of flat and smooth surfaces without costly compressed air or external power, using easy gripping technology for pick and place applications.

Since the Gecko does the lifting without compressed air or any other external power, it provides a more efficient, cost-effective solution.

Inspired by nature, the Gecko Gripper uses millions of micro-scaled fibrillar stalks that adhere to a surface using powerful van der Waals forces — the same way that geckos climb – making it possible to lift significant weights without leaving any marks.

The technology started as a research project at Stanford University and moved on to NASA’s Jet Propulsion Lab, where the design was used for salvaging and repairing satellites such as solar panels, given the Gecko Gripper’s unique ability to operate in a vacuum.

Now, it is being utilised to save money and energy for manufacturers, thanks to its quick, efficient abilities.

“Robotics – especially end-of-arm-tooling – is developing exponentially and we’re delighted to be at the forefront of this.

“We hope to continue developing these game-changing sorts of tools to help drive better efficiencies and cost savings in manufacturing, as collaborative robots become more ingrained within UK industry.”

The Edison Awards, named after Thomas Alva Edison, recognizes and honours the world’s best in innovators and innovations.

All award nominations were reviewed by the Edison Awards Steering Committee and the final ballot sent to an independent judging panel.

The judging panel was comprised of more than 3,000 professionals from the fields of product development, design, engineering, science, marketing and education, including professional organizations representing a wide variety of industries and disciplines.

The Hannover Messe Robotics Award honours ground-breaking innovations and is a major highlight of the industry-leading trade show.

The award was presented for the ninth time by Hannover Messe, together with the Robotation Academy and the trade journal Industrieanzeiger.