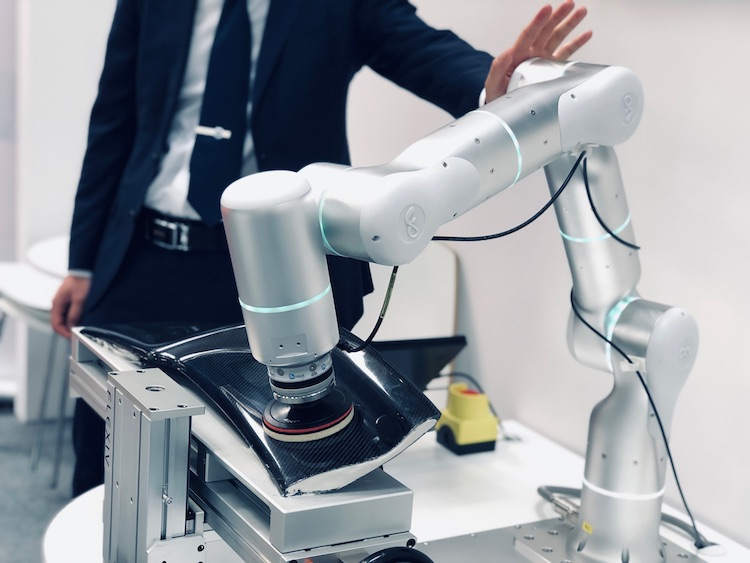 A startup company called Flexiv, founded in 2016 by a team from Stanford University,  has launched the third generation of its industrial robot at this year’s Hannover Messe event, in Germany. (See video below.)

Flexiv says that its new robot, called “Rizon”, is the “world’s first adaptive robot combining direct force control with advanced artificial intelligence”, although it’s not clear if it is a collaborative robot because the company itself has not used that word.

The company says Rizon “paves the way for greater performance and broader scope of robotic tasks across multiple industries including manufacturing, healthcare, retail and more”.

Flexive says the “adaptive” robot has “three distinctive traits that differentiate it from previous robots”:

It also has “industrial grade” safety features ensured by the hardware architect and torque-based control framework for intrinsically safe interaction in uncertain environment.

Shiquan Wang, co-founder and CEO of Flexiv, says: “Our robots are developed to have advanced manipulation skills to handle complex tasks in uncertain environments, which helps to provide flexible automation solutions for wider range of tasks in different industries.”

Using AI-based computer vision with depth camera, Rizon senses and recognizes objects even in complex environments, then generates its own motion and task plans.

The integrated AI learning system enables the robot to not just learn individual tasks but actually combine them to perform more complex ones. It also drastically shortens setup and programming time.

Bin Yue, founding partner of Gaorong Capital, says: “It’s quite unusual to see a startup develop a robotic arm from scratch that has a precise force control system integrated with top-notch AI technologies.

“It can be applied to a whole range of industries such as automotive, 3C production, agriculture, and so on. Flexiv has a world-class team and huge market potential.”

The company is demonstrating the benefits in proof-of-concept trials currently being conducted with global manufacturing firms as part of its Early Adopter Program, through which it is attracting key industry customers offering customized solutions and first deployments of Rizon.