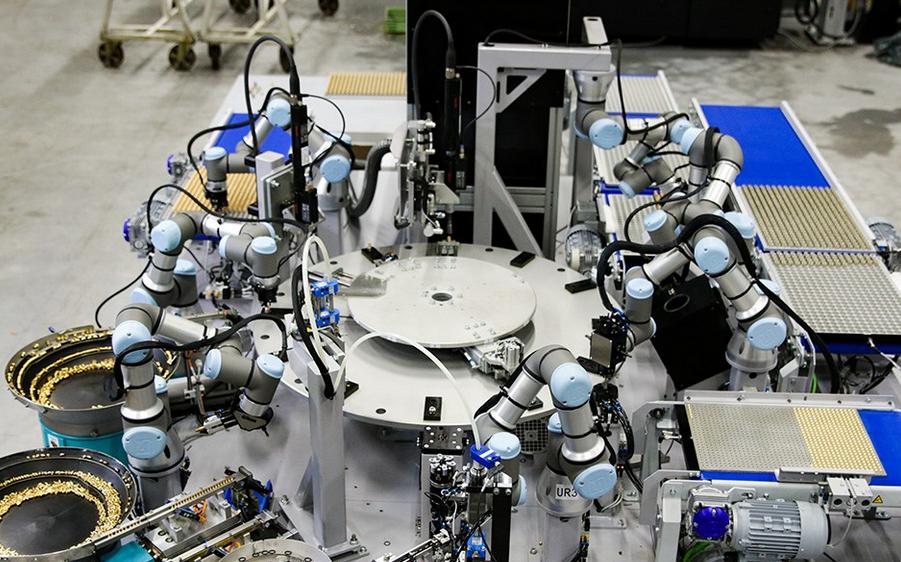 Fluidics Instruments, a Dutch manufacturer of oil burner components, has taken collaborative robot deployment to the next level with seven UR3 cobots working in tandem on an assembly line producing 1,000 oil nozzles per hour.

With a total fleet of twelve cobots, Fluidics Instruments is constantly increasing production and sales despite the shortage of skilled workers.

Like many other companies from various industries, Fluidics faced the challenges of high mix/low volume production every day.

Some products are produced in very large batch sizes over many years, while others are only temporarily in the product range. The machine operation at Fluidics therefore varies greatly.

In addition, the lack of skilled workers in the Netherlands has been a challenge for many years and the attempt to outsource production has not resulted in the desired product quality for Fluidics. A different solution had to be found.

The Dutch company found the solution in automation. In addition to various CNC machines, Fluidics has also been relying on robots for many years – including the collaborative robots from Universal Robots.

Thanks to their flexibility, the company can react ideally to the varying order situation. If a CNC machine is temporarily not in operation, the cobot is simply placed in front of another machine for picking-and-placing.

For this type of application, Fluidics has mounted two UR5 and one UR10 on mobile workstations. “This allows us to make optimum use of the robots,” explains Huward Wijnen, owner and director of Fluidics.

Another UR5 is permanently integrated into the production line and screws four filters into nozzles in the same cycle.

Probably the most eye-catching application that Fluidics has in operation is an assembly station for oil nozzles: Seven UR3s fully automate the assembly of an oil nozzle consisting of eight individual small parts, producing 1,000 nozzles per hour, which is significantly faster than if the assembly was carried out manually.

For the development and implementation of this application, Fluidics was able to leverage the expertise of its long-standing partner and system integrator Gibas Automation B.V., with whom all previous UR robots had already been implemented.

Recently, Fluidics also purchased a UR5e and equipped it with a Robotiq vision system. It is designed to remove sensitive workpieces from a CNC machine.

The new generation robot is ideally suited for this: an integrated force-torque sensor gives the robot arm sensitivity.