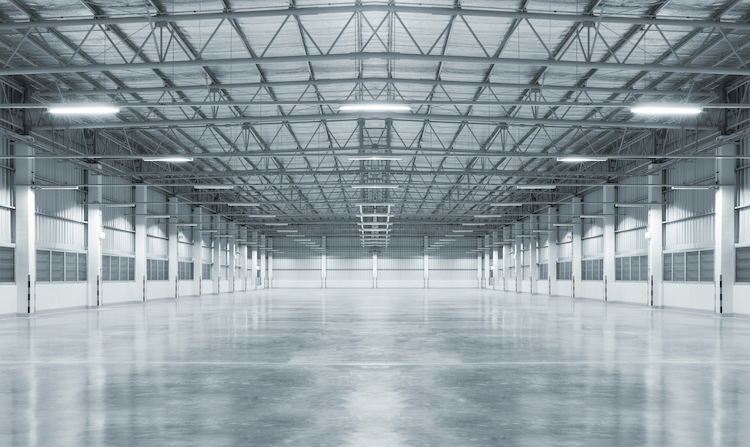 The US has almost 10 billion square feet of warehousing space, according to research consultancy CBRE, which says 1 billion sq ft of that space was built in the past 10 years.

Among the geographical areas with the highest number of warehouses are:

The vast majority of warehouses – even the new ones – are not automated to a significant extent, and if it is, it’s most likely with what might be considered traditional technology, meaning conveyors and human-driven forklift trucks.

But an increasing number of warehouses are opting for newer technologies, such as:

These new, computer-driven technologies can be used in addition to conveyors, but many warehouses are going exclusively robotic and leaving conveyors out altogether.

In an interview with Robotics and Automation News, Lit Fung, general manager of Geek Plus Robotics, says: “I think it’s around 70 percent of warehouses that are manual,” says Fung. “It’s only about 30 percent which is semi-automated or fully automated. That’s for all the world.

“In terms of robotics, I would say a very small percentage. We have sold more than 7,000 robots, which makes us one of the leading companies in this market, but it is still only a small part of the market.

“I think, in terms of the world market, we believe that the potential is very, very big – to infinity, because there is no limit to how much automation people will continue to need in the future.”

By “automated”, Fung mainly means conveyors, which are generally thought of as “fixed infrastructure”. Other technologies which we can include in this category, for the time being, are such things as automated storage and retrieval systems, or ASRS.

Although ASRS installations do often include robotic shuttles which move boxes around a cubic grid system, the entire system requires significant investment and is also in the category of “fixed infrastructure’.

The new and growing trend is mobile, autonomous and “flexible infrastructure”, which mainly implies such things as autonomous mobile robots and driverless forklift trucks.

These technologies are obviously not fixed to the floor. And while automated guided vehicles, which have been in warehousing for a decade at least, require the fixing of magnetic metal strips to the floor for their navigation, the new generation of autonomous robots or vehicles do not.

Autonomous vehicles tend to use a variety of sensors to map their surroundings and detect objects and movement, which means they can almost learn the layout of a warehouse and find their way around by themselves.

It’s not quite as easy as that, and some say that one of the issues currently faced by warehouse managers is recruiting staff with enough skills to integrate and manage robotic and other new technologies.

However, Fung says the integration of robots into warehouse operations is easier than ever and getting more straightforward every day.

“The amount of time it takes to integrate robots into a basic warehouse operation is minimal,” he says. “Obviously it depends on how complex the warehouse is, but integrating the robots does not take significantly longer or require any special skills than for other technologies.”

Geek Plus has supplied its robots and warehouse automation technologies to a wide range of customers, including Alibaba, the world’s largest e-commerce company.

The startup company’s growth in Asia has been phenomenal, which Fung credits partly to the so-called “robotics as a service” trend.

“We were one of the first companies to offer this, probably the first in our market,” says Fung. “Basically, you can hire our robots and pay on the basis of how much you use it, rather than buy them.

“Hiring the robots means your investment in robotic automation is not huge at the beginning, and you can very quickly see a return on your investment. And, of course, you can always change things around whenever you want.”

The latest offering is its forklift truck, which is being eagerly anticipated in the market. While it’s still a new technology, many people have been wondering when they will become available and how they will work.

“I think the forklift trucks will find a big market,” says Fung. “But I think we will need to guide our customers more closely with them, even more than our robots, because they are the largest machines we have built and have the highest payloads.

“This means we have much stricter safety considerations, and we need plenty of time to evaluate how we can implement them into a clients’ supply chain in the safest and most productive way.”

Another of the innovations is the one involving a collaborative robotic arm being integrated into a mobile vehicle or platform. It’s not entirely new as a concept, but Geek Plus is one of the very few companies which have released such a complex machine onto the market.

This is probably the product which has the most room for development because there remain many challenges to be overcome. Essentially, this is a machine that will perform tasks that were previously too complicated for robots and required humans.

That is, to move around, identify products, pick them off shelves and place them in boxes or bags, and then move those boxes or bags to a given location. Sound simple if you are human, but for a robot, that is a massive challenge – both in terms of hardware and software.

“Our vision is to bring innovations into the logistics sector,” says Fung, who says Geek Plus staff are keen to show what they are capable of in terms of technology research and development.

“We design and assemble the robots by ourselves in our factory in Beijing. We handle everything for the assembly and the design.

“The small components – motors, gears, and so on – we need to source those from manufacturers.

“So we order the small components and do the assembly in our factory.

“Of course, the core system control, and some core components will be made by ourselves. And we have a large software development team.

“The research and development team, in total, is over 100 people.

“All the software, all the control, it’s handled by our own development team.”

While Geek Plus is seeing great success in Asia, it’s yet to make a big push into Europe and North America, where only a few companies have had the opportunity to check out the company and its technologies.

But Fung and his colleagues will be exhibiting at this year’s ProMAT show, in Chicago, next month, and hope companies interested in robotic warehouse technology visit the stand and see their presentations.

“Towards the ends of last year, we decided to make the Asia-Pacific market our first priority,” says Fung.

“That’s why we already have some distributors and service centers in Asia – like in Singapore, in Malaysia, Thailand, Indonesia… this kind of countries.

“But luckily, we’ve got a lot of interest from around the world, so we have changed our marketing strategy.

“That’s why we have started expanding our market to Europe, and also America.”