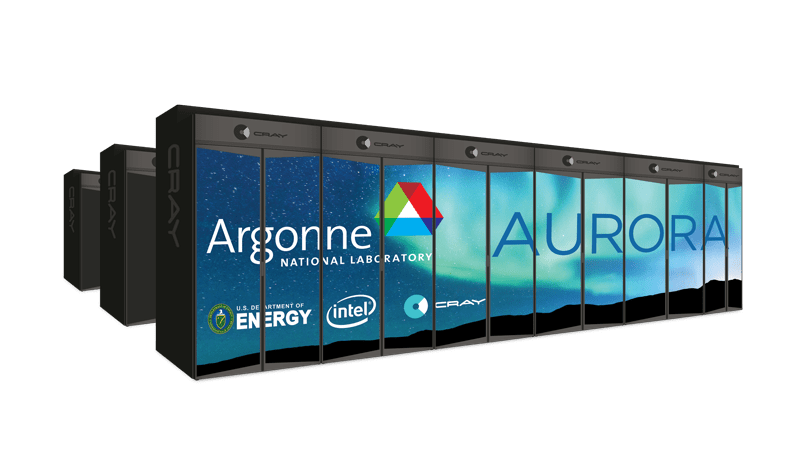 Chip giant Intel and high-performance computing specialist Cray are both working with the US government’s Department of Energy to develop what is claimed to be the world’s first exascale supercomputer.

The word “exascale” in this context refers to computing systems capable of at least one billion billion – or one quintillion – floating-point operations, or FLOPs.

That’s 1,000,000,000,000,000,000 computer calculations per second and represents a thousandfold increase over petascale supercomputers, which is the de facto standard today.

The Intel system being developed at DoE’s Argonne National Laboratory in Chicago, named “Aurora”, will be used to “dramatically advance scientific research and discovery”.

The contract is valued at over $500 million and will be delivered to Argonne National Laboratory by Intel and sub-contractor Cray Computing in 2021.

The Aurora systems’ exaFLOP of performance combined with an ability to handle both traditional high-performance computing and artificial intelligence – will give researchers an unprecedented set of tools to address scientific problems at exascale.

US Secretary of Energy Rick Perry says: “Achieving exascale is imperative not only to better the scientific community, but also to better the lives of everyday Americans.

“Aurora and the next-generation of exascale supercomputers will apply HPC and AI technologies to areas such as cancer research, climate modeling, and veterans’ health treatments.

“The innovative advancements that will be made with exascale will have an incredibly significant impact on our society.”

Bob Swan, Intel CEO, says: “Today is an important day not only for the team of technologists and scientists who have come together to build our first exascale computer – but also for all of us who are committed to American innovation and manufacturing.

“The convergence of AI and high-performance computing is an enormous opportunity to address some of the world’s biggest challenges and an important catalyst for economic opportunity.”

“Argonne’s Aurora system is built for next-generation artificial intelligence and will accelerate scientific discovery by combining high-performance computing and artificial intelligence to address real-world problems, such as improving extreme weather forecasting, accelerating medical treatments, mapping the human brain, developing new materials, and further understanding the universe – and that is just the beginning.”

The foundation of the Aurora supercomputer will be new Intel technologies designed specifically for the convergence of artificial intelligence and high-performance computing at extreme computing scale.

Pete Ungaro, president and CEO, Cray, says: “Intel and Cray have a longstanding, successful partnership in building advanced supercomputers, and we are excited to partner with Intel to reach exascale with the Aurora system.

“Combined with Intel’s technology innovations across compute, memory and storage, we are able to deliver to Argonne an unprecedented system for simulation, analytics, and AI.”