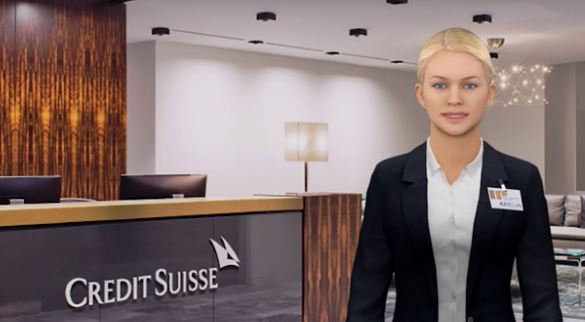 Credit Suisse has recruited a virtual robot to help its employees with day-to-day issues.

The investment bank partnered with IPsoft, the developer of the artificially intelligent robot, to customize it to advise on a wide range of issues.

After purchasing access to the “Amelia” platform from IPsoft, Credit Suisse set about teaching the robot how to understand common words the staff might use.

The main purpose is to help employees with tech issues, but Amelia could also provide guidance about such issues as car parking and getting around the building.

The learning process for Amelia is not as straightforward for Amelia as it would be for a human, mainly because of the problem of understanding how humans speak.

This area of AI is called natural language programming, and is difficult because every human has their own, unique way of pronouncing words as well as using their own version of the same meaning.

So, for example, one person might say “lift” and another “elevator”; one could say “car park” and another “parking lot”; and so on.

But pronunciation is probably the key issue to overcome and Credit Suisse is working with IPsoft to develop solutions.

Credit Suisse’s head of global service desk, Jen Hewit, says: “Nobody can do it all in AI. So we rely on a team of people who bring varied skills, high interest and the ability to work on the fly.”

The company says users of the Amelia virtual robot have so far responded to her as typical humans would – “thrilled, unimpressed or annoyed”.

The main advantage of Amelia is that she is always available, whereas human staff on the Credit Suisse helpdesk may sometimes be at full capacity and be unable to take additional calls.

And while she is limited in what she can do, if Credit Suisse staff are having problems with their computers, she can always ask the classic question, “Have you tried turning it off and on again?”

Once the NLP and other issues are resolved, the virtual robot will be able to perform many of the tasks a typical human can do now, particularly in customer service departments and on helpdesks.