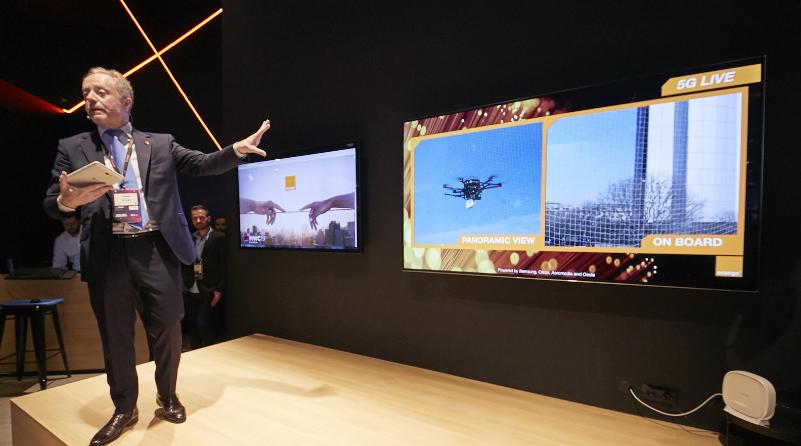 Samsung Electronics, Cisco and Orange unveiled  two promising industrial 5G applications – a drone and an industrial robot, at the MWC19 in Barcelona, Spain, in the last week of February.

The 5G drone, carrying a very low latency, high-quality video system was piloted from the Orange booth at the Fira de Barcelona.

The drone, which was located outdoors at an Orange datacentre, carried a 5G router (CPE) that was used to transfer commands to the drone and transmit a high-quality video feed with low latency.

At the Orange booth, the pilot controlled the drone by using a 5G tablet. Aeromedia, a leading drone operator, collaborated in this demo.

The 5G autonomous robot carrying manufacturing parts transmitted live video feeds taken by a 360º camera and a Full HD camera, both installed in the robot.

The video streams allowed operators to monitor the robot’s environment remotely, and to react and control it when its autonomous operation was interrupted due to unexpected obstacles in its path.

The video and the commands controlling the robot were transmitted through a 5G network. This demonstration was done in cooperation with Acciona, a global company providing renewables, infrastructure and services.

Samsung and Cisco joined forces for this live demonstration. Samsung used its 5G solutions including virtualised RAN, one of the smallest 5G access units, multiple indoor and outdoor 5G routers, and 5G tablets.

Leveraging the wide bandwidth available at mmWave bands, such as 26GHz, and advanced antenna technologies such as massive MIMO and beamforming, the companies were able to achieve mobility, a very low end-to-end latency, and high capacity enabling the transfer of high-quality video feeds.