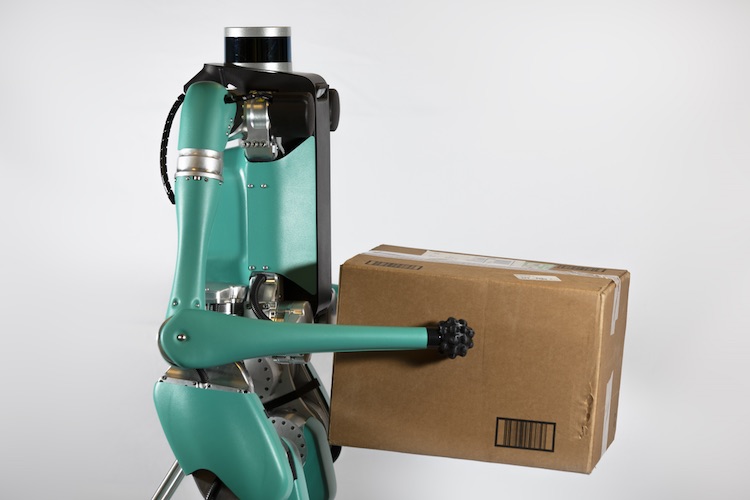 Dr Jonathan Hurst, CTO and co-founder of Agility, says: “For us, arms are simultaneously a tool for moving through the world – think getting up after a fall, waving your arms for balance, or pushing open a door – while also being useful for manipulating or carrying objects.”

These new capabilities are important when moving through complex, human-oriented environments, for tasks such as curb-to-doorstep delivery.

Although still in testing, Digit is strong enough to pick up and stack boxes weighing up to 40 lb (18 kg), as well as durable enough to catch itself during a fall using its arms to decelerate.

In addition to the physical changes, the control system for Digit has been overhauled to enable advanced behaviors such as stair climbing and footstep planning, all controlled through a robust API that can be accessed both onboard the robot and via a wireless link.

Out-of-the-box, Digit will be up and walking within five minutes, even for users who are not legged locomotion control researchers.

Dr Damion Shelton, CEO and co-founder of Agility, says: “Most of our Cassie customers were specifically interested in developing controllers for legged locomotion.

“We developed Digit for the much larger audience of users who wish to explore broader applications that are enabled through legged mobility, rather than focusing only on the mobility itself.”

As with Cassie, Digit will come with comprehensive warranty support and post-sales applications engineering assistance.