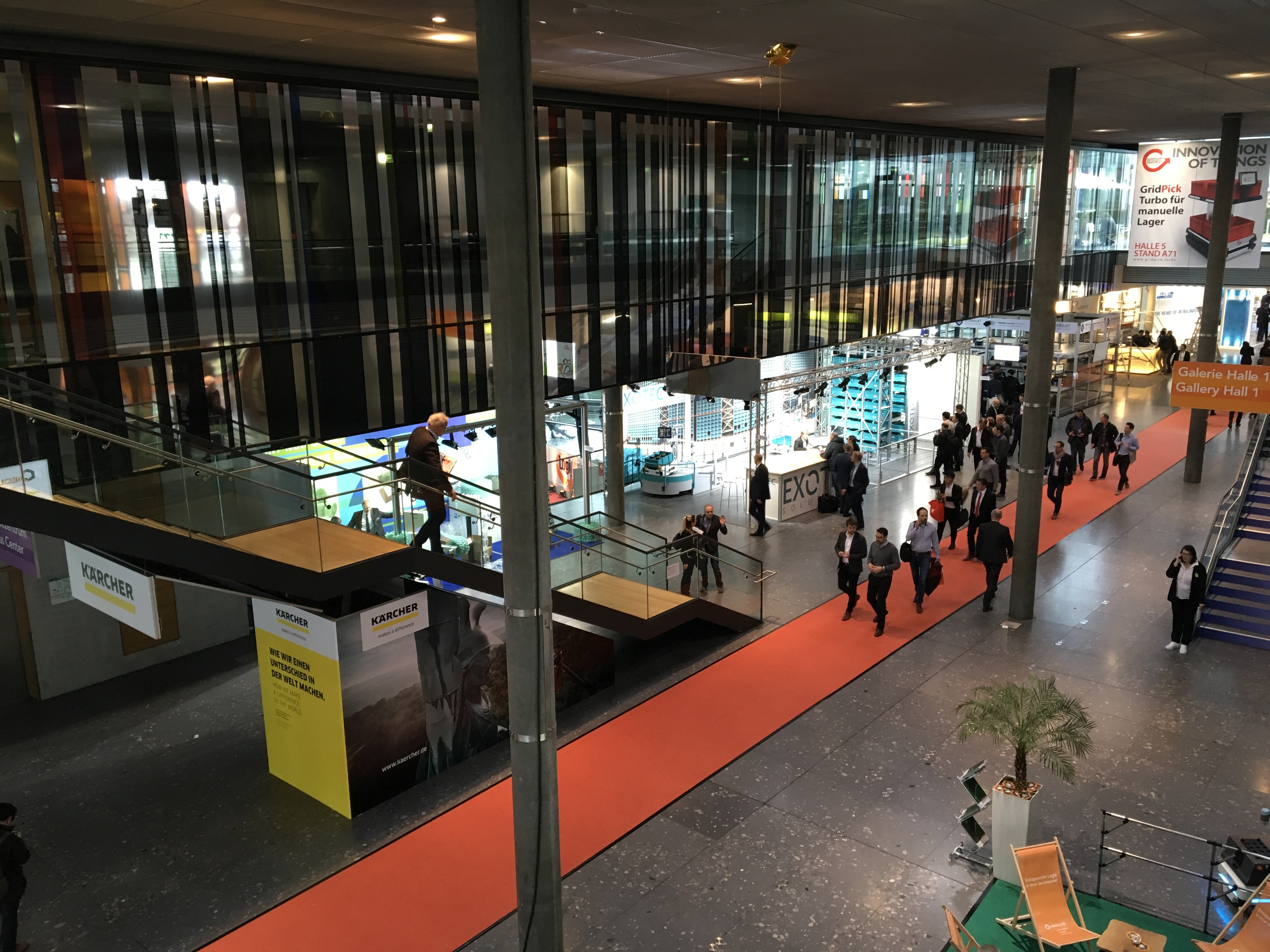 Held annually in Stuttgart, right next to the airport, the show attracts thousands of exhibitors and tens of thousands of visitors.

More than one of the massive halls in the Messe centre are filled with autonomous and automated guided vehicles, and many of the companies RoboticsAndAutomationNews.com reports on are present here this year.

It’s quite surprising the number of companies providing AGVs, and not just the ones which require the magnetic strips to be placed along the ground to tell them where to go. Most AGV companies have either developed or already launched “autonomous” guided vehicles, which do not need anything to guide them — they can build their own maps of a facility and navigate their own way round the place.

It’s an exciting time for this particular segment of the market. It’s true that AGVs have been around for a couple of decades, but it’s only in the past year or two that there has been an Influx of new companies into the market.

Geek Plus, GreyOrange, Mobile Industrial Robotics and many others are the newbies — in fact, the newbies probably outnumber the “established” companies 2 to 1 or even 3 to 1.

The reason for the burgeoning number of companies is probably two-fold. One is that the technology and components used in the manufacture of the vehicles have become more widely available and affordable.

Sensors are a good example of a critical component which has become more affordable, although when it comes to high-end robotics, even sensors are not exactly cheap.

The other factors which are accelerating the growth of this market is the demand. In Stuttgart, there are a lot of engineering companies, among them some very large, world-famous ones. Bosch is based here, so is Mercedes-Benz, and a whole host of others.

Stuttgart has a long history of engineering excellence, which looks set to continue, growing eastwards into China, the market everyone wants.

But it’s not simply a case of making things and selling them to China. For China itself is looking to manufacture robotics products — as well as other advanced technologies — and sell them to Germany, and to the wider European and global market.

And this is something that has caused tensions in different parts of the world.

In the US, there has been a groundswell of antipathy towards China, which, some would argue, has led directly to the trade dispute between the two countries.

A long-established complaint has been that China uses cheap labour to produce goods and also sells its products at a loss to undermine the competition. That’s even before questions about security are considered.

Speaking to a senior executive at one of the Chinese companies at Stuttgart, I was told that most of the complaints are unfounded when it comes to robotics and automation because it’s simply not possible to produce these technologies using cheap labour — skilled, well-paid workers are required.

And on the subject of underpricing, the executive said that his company’s products tend to be medium to expensive, compared with the competition. So that’s an inaccurate argument.

And although he did not comment on the issue of the company’s products not being allowed to be exhibited on the first day of the show, he did imply that there are some unfair decisions being made in markets such as the US.

His basic argument was that the US was being somewhat protectionist in its policies, and hoped the current news reports suggesting that a trade deal with China is imminent were indeed true.

For a market such as AGVs, as well as many segments within robotics and automation, there is no single clear dominant company. There is no equivalent of Google or Facebook or Apple. All of the companies are relatively new and are looking to establish themselves and their own solutions, many of which are new and distinct.

The next two years will be a critical time period in this respect. At the end of it, there may emerge some which are more successful than others, and hopefully these things will be decided on the merits of the technology and the business proposition — not political interference.

Google and Facebook together account for around 80 per cent of all the online advertising revenues generated worldwide. And Apple, as has been well documented, is a trillion-dollar company.

Such monopolistic, or at least overly dominant, market positions sometimes make it impossible for smaller companies to set up and compete. The robotics and automation sector is unlikely to see a similar situation developing, but it’s worth keeping it in mind because although the companies offer their own blend of technologies within the product’s parameters, there is the possibility of one large investment company funding many of them, thereby gaining dominance in a sort of roundabout way.

Much of the increase in demand for AGVs and warehouse automation products are the result of the massive boom in e-commerce, something which another executive at an AGV company confirmed.

She said e-commerce companies were the largest group of customers for AGVs, although she did not provide any supporting data. She added that the intralogistics sector was second in terms of demand.

In Stuttgart, at an event such as LogiMAT, one imagines that the majority of potential customers at least would be from an intralogistics background rather than e-commerce, given the city’s high concentration of large, global manufacturing companies.

When it comes to e-commerce, most people know that, in the US at least, Amazon has been utterly dominant in this area.

Over the past Christmas period, Amazon alone accounted for 40 per cent of online orders placed in the entire US. Not bad.

Also, Amazon was among the first to identify the need to establish fast-operating warehouses, and bought pioneering warehouse robot company Kiva Systems, whose products it promptly took off the market.

The upside of this was that other companies stepped forward and developed and launched their own warehouse robots. But by the time they came to market, Amazon had already established itself as arguably the largest, most efficient e-commerce operation in the world.

In fact, Amazon is now one of the top 10 largest logistics companies in the world.

But luckily, e-commerce is not the only market demanding warehouse robots. Otherwise, Amazon and other large online retailers would be manufacturing the majority of AGVs and keeping them for themselves. That may actually be the scenario now but independent AGV manufacturers are gaining ground.

As mentioned, large manufacturing facilities requiring efficient and extensive intralogistics operations are probably the largest market for companies exhibiting at LogiMAT, and that’s not yet a market that has an Amazon, Google or Apple dominating it.

Moreover, there may be additional markets opening up to AGVs, markets which perhaps most people would not have thought of.