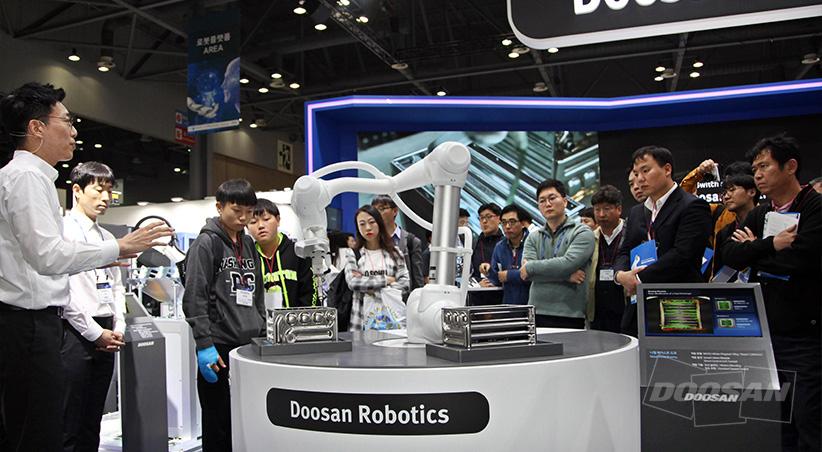 Doosan is planning to make a stronger push into collaborative robotics.

Doosan Robotics CEO, Lee Byung-Seo, says: “Collaboration is the key, not the 1: 1 replacement with the worker.”

As the debate about the Fourth industrial revolution continues, interest in cooperative robots, which have become hot topics in the manufacturing industry, is spreading. However, apart from the growing interest, the speed at which cooperative robots are introduced into manufacturing sites is slowing to the point of concern to the concerned parties.

Soon Lee, president of Doosan Robotics, said, “In the case of industrial robots, 710 units are sold per 10,000 people, and the domestic market has the highest rank in the world, but the cooperative robots are not.”

Lee attended the ‘Robot Forum Launching Ceremony for Basic Planning’ hosted by the Ministry of Commerce, Industry and Energy on the 6th, organized by the Korea Robot Industry Promotion Agency, and presented a solution for the domestic cooperative robot market. .

“In the case of simple repetitive tasks in the manufacturing industry, overseas SMEs can easily assemble equipment assisted work with cooperative robots and secure manufacturing competitiveness,” Lee said, “Assembly work requires the combination of hands and hands, 1: 1 replacement is impossible because of the process. In addition, cooperative robots are helping to work with heavy and hazardous substances in overseas countries.

In addition, it is possible to increase the production efficiency by distributing the worker and the cooperative robot with high distribution ratio of the manual work. In the case of the gluing and polishing work, the burden on the body is large, Due to the difficult nature, this representative pointed out that the introduction of cooperative robots is urgently required.

At the conclusion of the presentation, Lee said, “Cooperative robots are easier than conventional industrial robots, so it is important for them to challenge themselves first.” “Robots and” robots ” “He said.

In addition, he added, “In order to increase efficiency after the introduction of cooperative robots, it is necessary to change the awareness of automation to find out simple repetitive work that robots can do well.” “When users introduce robots, OPEX (operating cost), and it is necessary to actively benchmark companies in the same industry that have already introduced cooperative robots. “