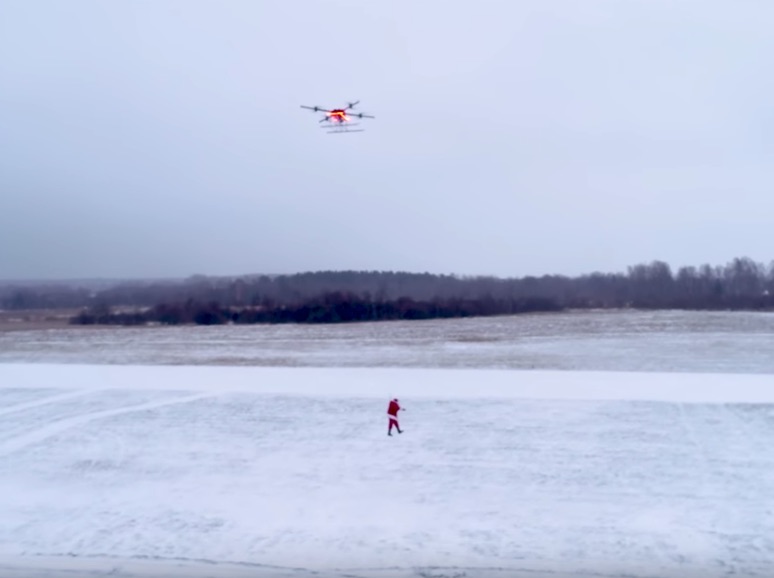 Startup company AirBoard appears to be working with Father Christmas to test a drone to replace Rudolph the red-nosed reindeer and their famous flying sleigh with which they deliver presents all round to world to billions of people every year on the night of December 24th. (See video below.)

But that’s just one of AirBoard’s markets, and a very small one, given that there’s only one Father Christmas, or “Santa Claus”, another one of the many names under which the kindly old man travels, often dressed in a red pajama suit.

The main commercial market the northern European startup is aiming for with its drone is the agricultural sector.

Elviss Straupenieks, CEO of AirBoard, says: “We’re building the world’s most powerful drone with an initial focus on agri-tech and lifted Father Christmas – who weighs 220 pounds – in the air last Christmas to prove it.

“We’re a team of six people including the fastest drone racing pilot in the world (FAI 2018) and a pioneer in the electric car industry backed by Boost VC (billionaire Tim Draper family) and Alchemist Accelerator (voted #1 enterprise accelerator by Forbes).

“Personally, I started this when I was 16 when I became the youngest person in Latvia to register a business and was named as one of the top 25 under 25 in Europe by Nordic Business Report.”

AirBoard claims its “Agro” drone is up to five times more precise than a helicopter, and is half the cost.

It says farmers could benefit from better root growth due to no soil compaction and increased worker safety.

It also creates less noise compared to a helicopter spraying, saves time, and is environmentally friendly because it is powered 100 percent by electricity.