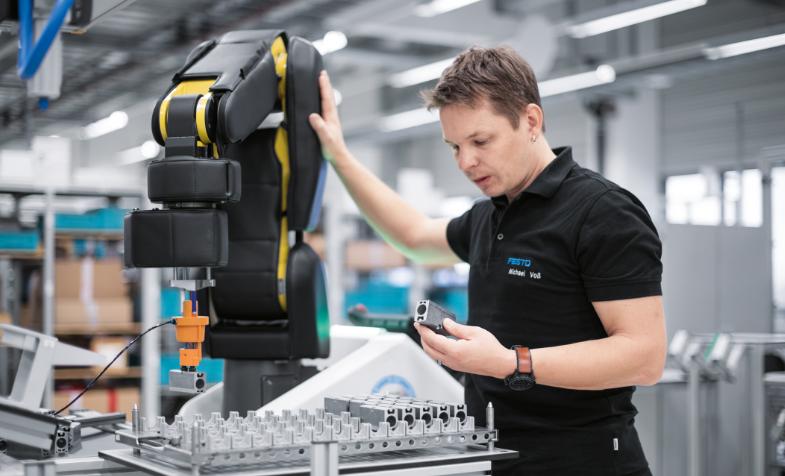 In the ARIZ research project, Festo is working with partners to develop economical areas of application. The role of the human being in tomorrow’s production is often discussed. What new tasks will arise?

Machines and robots with extensive safety systems and suitable sensor technology enable humans and robots to move in the same work area and work together without safety barriers.

In order to increase economic efficiency, the ARIZ project has set itself the goal of establishing a flexible and versatile production assistant in safe human-machine cooperation.

This enables the demonstrator to be used at changing production workstations. It is intended to relieve the workload of employees by assisting and performing monotonous, ergonomically one-sided tasks.

A further project objective is to derive special qualification requirements for the employees who work with robots at these production workstations. Therefore, Festo Didactic is developing an appropriate learning system that optimally prepares employees for their tasks in the production of the future.

Robots as workers on the move

Until now, robots have usually only taken over one single programmed workflow. In this project, the partners are developing a demonstrator for highly versatile production: this robot should not be permanently installed in one location; rather, it should be mobile and flexible in use.

It is connected to the higher-level IT system in order to be able to retrieve information and to simplify configuration for the operators.

Festo has successfully tested this application in the start-up stage – an area in which new technologies are tested before they are transferred to industrial production. In this area, an APAS robot from Bosch helps in the quality inspection of printed circuit boards.

“We are currently further developing the concept of the ‘mobile robot worker’ in order to transfer the APAS robots to industrial production and electronic assembly. There, the robot will provide flexible support at various assembly workstations,” reports Michael Voß, ARIZ research engineer and project manager at Festo.

The challenge of increasing versatility

“The major challenges for assembly with robots are customized products with plenty of options in small batch sizes,” explains Michael Voß. “Only when the application is economical will automation make sense. For example, as few as possible different screw types and sizes should be used, so that the robot does not have to constantly change the screwdriver.”

With gripping tasks as well, standardisation is one key to success; however, there is also demand for universal solutions such as the DHEF – the adaptive shape gripper from Festo. This gripper uses the principle of the chameleon’s tongue to grip a wide variety of objects securely. With its elastic silicone cap, it can even pick up and deposit several objects in a single gripping process – without the need for manual modification.

Together with Festo Automation, Festo Didactic is also involved in the ARIZ project. RWTH Aachen University is researching the effects of human-robot cooperation in terms of occupational science, for example concerning acceptance. robomotion GmbH develops assembly stations based on the concept of the mobile robot worker.

The ARIZ project is funded under the number 01FG14003A by the German BMBF (Federal Ministry of Education and Research) as part of the programme “Innovations for tomorrow’s production, services and work”.