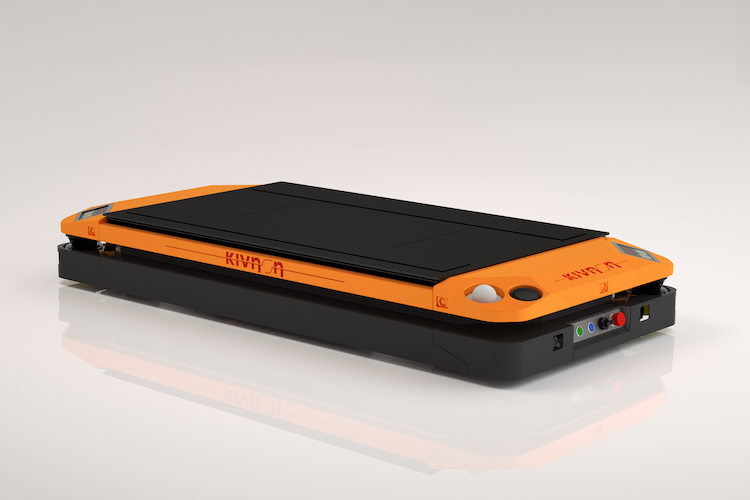 Kivnon has launched a new autonomous guided vehicle for logistics and supply chain operations. The company plans to showcase it at the LogiMAT event, in Germany, next week.

The company describes the vehicles as “an omnidirectional AGV superfine” that is designed for all types of surroundings and which can lift and carry up to 1.000 kg with “free navigation”.

Kivnon, a Spanish automated guided vehicle manufacturer whose customers include all the large automotive companies, says it has developed the new and “completely different AGV” to fit into the Industry 4.0 revolution.

This enables it reduces operations working always with a 360º perimeter security, says Kivnon.

Additionally, Kivnon says the K41 Slim is “even more efficient and endowed with more autonomy due to the lithium batteries it has equipped”.

Height is also one of its advantages, since it is lower than 210 mm, which makes it an extremely flexible AGV and ready to operate in “all kinds of environments and trollies”.

“Regarding the circulation of the AGV, Kivnon has also known how to differentiate itself implementing a free navigation, that is, without any elements on the surface,” says Kivnon.

This technique, based on SLAM technology and named mapping, allows the K41 Slim to build a map of the place where it is located and, at the same time, use that map to determine its own location in an unknown scenery and environment in real time.

K41 Slim is in line with the “friendly innovation” concept that Kivnon has always implemented to all their products, introducing movement and simplicity in processes so complex such as the industrial ones.

“All these features in one AGV make the K41 Slim a unique product on the market,” says Kivnon. “In this way, Kivnon continues with its commitment to innovation to offer solutions that set trends in the Industry 4.0.”

Kivonv says this new autonomous vehicle is “just the beginning of a new family”.

The K41 Slim will be exhibited for the first time from the 19th to the 21st of February at LogiMAT, Stuttgart, one of the leading trade shows in the world for the logistics field.