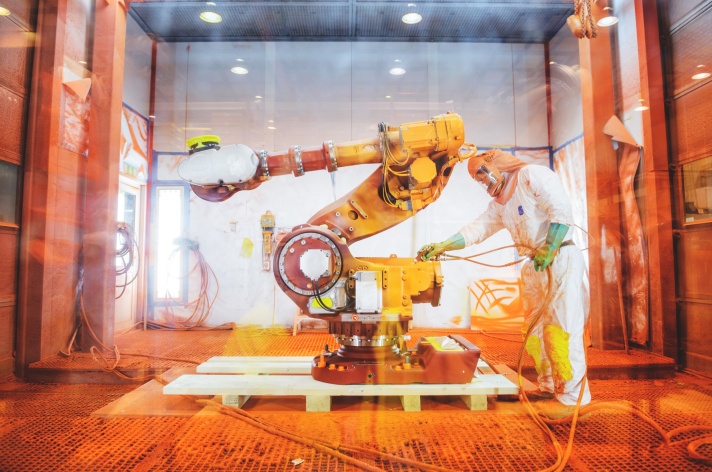 Additionally, every year, the organisers of the event choose a “partner country”, which is given a higher profile in publicity activities and more support to access Germany’s huge industrial base.

Last year, Hannover Messe’s partner country was Mexico, whose then-leader, President Enrique Peña Nieto, was at the opening ceremony and toured the event with German leader Chancellor Angela Merkel. The previous two years’ partner countries were Poland and the US.

This year, Hannover Messe organisers have chosen Sweden as the event’s partner country, and some representatives from the Swedish Embassy in London attended a press event to highlight the partnership and preview the event. And we were invited.

The sound of Abba

Magnus Stuxberg, deputy head of mission at the Swedish Embassy, said the country would be looking to highlight the huge amount of innovation taking place in the Scandinavian country.

And while the traditional industrial sector is still the largest sector of the economy, new and innovative companies are emerging in what’s called the “tech” sector, which usually refers to the computer and online world.

“Music is Sweden’s third largest export,” said Stuxberg. “For example, Spotify is Swedish, so is SoundCloud.”

Apple, arguably the largest manufacturing company in the world across all sectors and certainly the biggest in tech, is rumoured to be interested in buying Spotify, a massively popular music streaming service.

With almost 100 million paying subscribers, Spotify is unlikely to want to sell. In fact, it’s reported to be in talks to buy podcasting company Gimlet for $200 million.

But as successful as Spotify is, it’s dwarfed by other Swedish companies, many of which are household names around the world. They include:

And industrial robotics giant ABB is, of course, Swedish in part at least.

Volvo has recently been of particular interest to this website because of its ongoing development of autonomous vehicles – both for the consumer market as well as the industrial market, such as mining.

And once a mobile phone giant, Ericsson, meanwhile, is one of the companies leading the development of fifth-generation telecommunications networks, which will become critical in many increasingly prevalent technologies, such as connected cars and smart cities.

One of the largest countries in Europe in terms of landmass, Sweden only has a population of 20 million, which is around a quarter of Germany’s.

Outside of the main cities, it’s not unusual to find towns and villages with a few hundred or a few thousand people living there. Large parts of the north of the country have no people there at all, not surprising when you consider that it’s inside the Arctic Circle.

And when the nights are as long as six months, it gives you a lot of time to tinker with your new inventions in the garage.

Interestingly, among the things invented in Sweden are:

That inventiveness is going to help in a world which is constantly changing in socio-economic terms, but mostly in technological terms.

Sweden’s largest export earners are industrial machinery, automobiles and forestry products, such as pulp, paper, and wood. Its imports include machinery, metals, and petroleum.

Specifically, among the largest exports are:

In terms of total revenues, the difference between imports and exports is minimal: approximately $133 billion in exports and $131 billion in imports.

Germany, by far, is Sweden’s largest trading partner, accounting for 10 per cent of all its trade. Norway and Denmark are second and third respectively, accounting for around 7 to 9 per cent each.

The total gross domestic product of Sweden is more than $550 billion, which works out at about $50,000 per person, which is among the highest in the world.

Sweden’s partnership with Hannover Messe comes at a pivotal time for both sides, according to Marco Siebert, director of international relations of the event’s parent company, Deutsche Messe.

German industrial companies, like most others around the world, have been on a huge digitalisation drive, which means that everything that can be digitised is being digitised.

From creating a 3D computer model of the tiniest component, to building a virtual factory, complete with machinery which feed data into the computer through the network. Even real-world physics simulations could be included.

At the moment, everything seems to be about computers – software and hardware. So much so that, as Siebert explained, Hannover Messe no longer makes a distinction between digital and physical industrial exhibits – computer technology permeates everything.

Previously, there would be a dedicated hall for digital technology, said Siebert. But not anymore.

“Globalisation and digitalisation are driving industrial transformation,” Siebert had noted in a previous comment. “Hannover Messe is the venue where the global business, manufacturing and political communities to gather to discuss there two crucial topics as well as other current issues and challenges facing industry.

“For example, how do we ensure that algorithms enable machines to process and react to data logically but not act nefariously?”

It might sound too melodramatic or hysterical to constantly point to films such as The Terminator and RoboCop – or any other similar film – by way of warning about what can happen if humans let the machines take over. But such issues are actually being taken seriously.

The machines used in industry, as well as the machines produced by industry, are inherently dangerous – they’re big, powerful and will respond to any command if instructed correctly through computer code.

So it’s no wonder, then, that German industry – like all others – is looking for coders who they can trust and for algorithms they can control.

Otherwise, the machines will obviously take over, and no-one wants that – not even the hackers.