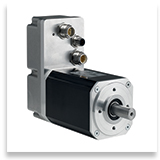 The company says its SQ75 DCmind Brushless 600W motor has integrated electronics and “knows no limit”.

The new motor’s onboard intelligence, its safety functionalities and its communication capabilities, SQ75 offers new applications to Crouzet. This new addition of the DCmind Brushless range is manufactured in France and is available in three versions from 310 W to 600 W.

Crouzet says it has set its goal to technical excellence with SQ75. The starting point is high torque values, especially for the 310 W version, displaying a rated torque of 1 Nm (and a peak of 2.5 Nm; up to 6 Nm for the 600 W version), over an extended speed range of up to 5,000 rpm.

Michel Nicol, business engineer at Crouzet, says: “SQ75 is thus capable of high rates of acceleration and deceleration, even for high inertia loads by means of its reject energy management module. A functionality that is useful for managing wheel braking of service robots in intralogistics environments.”

Crouzet says the motor is “unique on the market”. The off-the-shelf SQ75 is water- and dustproof (except the shaft and front face), including in the 4.5 N.m version with holding brake and two levels of protection: IP67[1] and IP69[2], suitable for the most severe environments.

Camille Machet, marketing motion offer creation for Crouzet, says: “Combined with the most extended operable voltage range on the market (from 9 V to 75 V, on mains electricity and/or with battery), its level of seal enables us to propose SQ75 for service robotics: agriculture (agbots), logistics (AGV, AMR), defence (UGV), or even for industrial cleaning.

“Supplied with or without a gearbox and able to operate in autonomous mode or on a CANopen network, SQ75 can be used for other applications such as conveyor systems, packing machines or access control systems for vehicles or people.”

SQ75 operates with complete safety, by means particularly of its Safe Torque Off inputs, enabling the motor to be released, on a fully independent basis, from the microprocessor in the event of an emergency, for instance, on a machine integrated on a safety chain and requiring a special operation by a technician.

Thanks to its CANopen interface, SQ75 can be controlled in compliance with the CANBus standard.

These two communication configurations enable alert and usage data feedback by means of which users can create preventive maintenance functionalities.

Easy to install, operate and maintain

Machet says: “Crouzet pays great attention to the integration of its products in its customers’ business environments, especially during installation, operation and maintenance phases.”

This results in protection against wiring faults, initialization of the motor on the computer with a commercial USB cable, fine-tuning facilitated by DCmind soft and CANopen software (chart plotter, performance recorder, control loop tuning and error code feedback).

Additionally, the user has the possibility via the USB port of carrying out a local diagnosis of the motor while CANopen is running, and of checking the status of the communication with a LED incorporated in the front face.

Powerful, intelligent and easy to set up, SQ75 is in line with the trend of transformation of commercial control actuators towards “all in one intelligent motors”, says Crouzet.