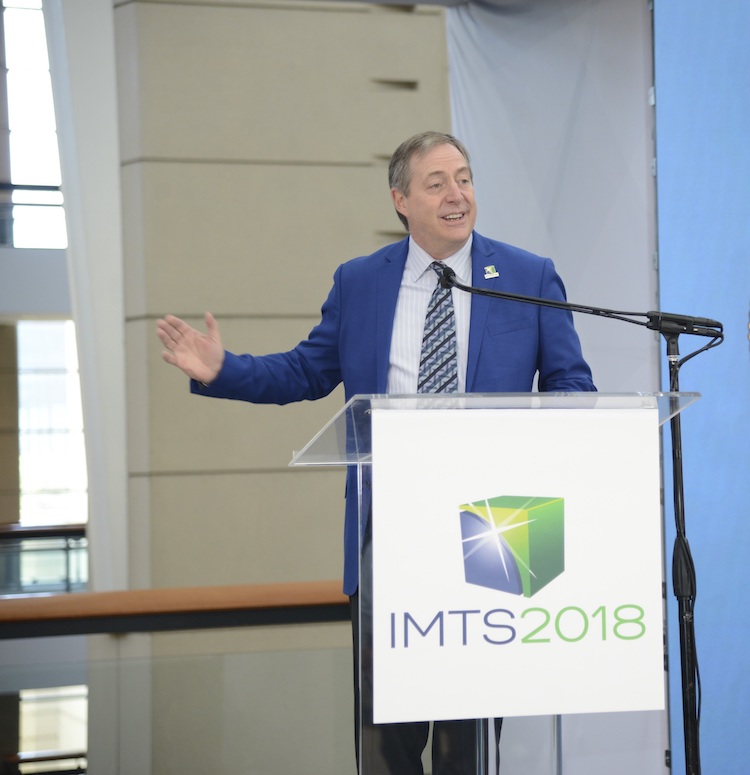 The International Manufacturing Technology Show partnered with European media to spread awareness of the show and attract visitors. This year it set all-time records for show metrics and welcomed 129,415 people from across the globe. There were 2,123 booths over 1,424,232 sq ft of exhibit space and 2,563 exhibiting companies.

Following the recent show, Peter Eelman spoke about its success and why IMTS is such an important event for European companies.

Eelman is the vice president – exhibitions and business development at AMT – the Association for Manufacturing Technology, which owns and produces IMTS.

There are a number of excellent shows concentrating on manufacturing technology: IMTS, which takes place in every even year, and EMO Hannover, in odd years, have the greatest impact.

AMT says there is a real need to attend events such as IMTS, and EMO Hannover on an annual basis because the rate of change is so dramatic now year after year. IMTS emphasizes technologies that are on the horizon, so manufacturing leaders go there to find new ideas that impact – and probably shape – their future. They cannot afford to miss it, says AMT.

According to Eelman, “IMTS has proven once again to be the show of today and future technology. On the global stage that is a unique position. Manufacturers globally look to IMTS because of its size, as well as breadth and depth of technology. Exhibitors from around the world are looking to introduce their technology at IMTS.

With the advent of digital technology, digital transformation has made it possible to make additions and revisions to products immediately. It is now possible to design, model and implement much easier than in the past. There is no longer the need to spend time tied up in testing, which means that new products arrive on the market much faster.

As Eelman explains, “Digital technology means you don’t necessarily have to have had 50 years in the manufacturing business. You can bring experience from other disciplines, and that’s a great formula for start-ups or new ventures for established companies.”

One of the most exciting innovations at IMTS 2018 was Athena from iTSpeex. The industry’s first voice-operated assistant, Athena debuted at IMTS in the Makino and OKK booths, as well as in AMT’s Emerging Technology Center.

Visitors could control a 5-axis DMG Mori CNC. Providing that type of intelligent assistance to machinists allows them to operate at a higher level. Eelman says that he “anticipates that visitors to IMTS 2020 will see multiple examples of this type of machine intelligence”.

With the next show in 2020, IMTS will continue to be one of the most exciting outlets to feature new technology. More and more small, developer-type companies are emerging, and integrating with larger companies. Access to the market is becoming easier so this is opening the way for new players and companies to come to the market.

Eelman gives the example of “a company that is finding a new role in the integration space by being more of a digital integrator than strictly a machine integrator.”

As he says, “the overall trend of manufacturing is more scientific than it has been in many years”.

The suburbs surrounding Chicago and other major Midwest cities serve as the US or global headquarters for the largest names in manufacturing, which means that IMTS Global manufacturers who want to make an impact must be at IMTS to be taken seriously in the marketplace. Many of the exhibitors bring their staff, from their CEO to their maintenance technicians, so European visitors can make the connections they want at every level.

To continue reaching out to potential visitors, Eelman and his team plan to visit other European shows. With Hannover Messe being their highly respected partner and co-locating with IMTS, they will definitely have a presence at Hannover Messe 2019 and a large presence at EMO Hannover next September.

Looking to the future, Eelmans also speaks about some of the other events that AMT organizes. He says: “These include a number of meetings and conferences throughout the year and AMT/USA Pavilions around the world.

“We will also be introducing MT360, an event designed to match the digital design community with traditional manufacturers. MT360 will be held June 17-20, 2019 in Santa Clara, California.”

AMT says IMTS 2020 will be an ideal opportunity to get up close to see and try new technologies, talk to the tech builders and find inspiration.