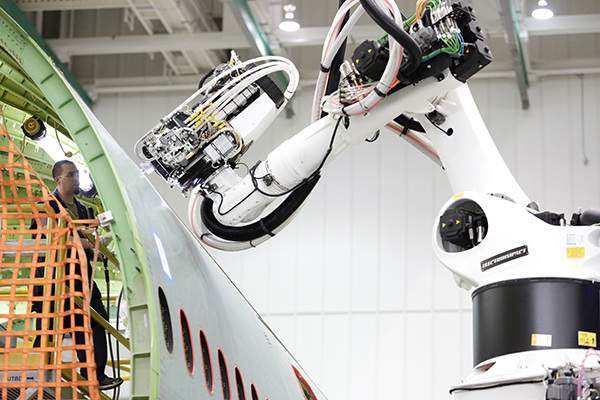 The global aerospace robotics market is expected to display higher growth rate over the next seven years, according to a report by Million Insights.

The market is subject to witness a substantial growth due to the growing demand for robotics and automation in the aerospace industry, rising adoption of robots for efficient aircraft production, and increasing implementation of aircraft orders backlog.

Globally, the market is predicted to generate massive revenue over the next seven years, providing numerous opportunities for market players to invest in research and development in the aerospace robotics market.

Rising adoption of automation and robotics in the production of aircraft carriers has changed overall outlook of the aerospace robotics industry since the last decades.

Additionally, an increasing number of initiatives taken by the regional governments to promote the use of automation in manufacturing processes are likely to boost the sales of aerospace robots.

Such initiatives by regional governments include tax exemptions and tax cuts, reducing overall manufacturing cost and elevating the manufacturing opportunities for industry players across the globe.

These factors are anticipated to drive the growth of the automotive robotics market in upcoming years.

Articulated robotics is one of the fastest growing segments in the market with highest revenue generation in recent years. Increasing adoption of the articulated robot is credited to its numerous advantages such as flexibility and degrees of freedom.

Some of the application of articulated robots in the production of aircraft include welding, material handling, dispensing and material separation.

These robots are specifically designed to perform required tasks in restricted periods. An increasing number of application of automotive robots in industrial manufacturing processes is a key factor responsible for the growth of the market.

Early adoption of the aerospace robotics in supply chain operations leads to minimum production delays. Consultants at Million Insights say the aerospace industry “needs to follow specific periods during manufacturing processes coupled with process control at each step in the production line”.

The market is broadly categorized into four major segments based on the application type such as drilling and fastening, inspection, welding, and painting and coating.

The drilling and fastening are considered as one of the fastest growing segment in the aerospace robotics market with substantial revenue generation in the last few years.

The growing popularity of aerospace robots in the drilling and fastening segment is attributed to the increase in production activities and higher efficiency of the aerospace robots. The painting and coating segment has also witnessed substantial growth due to enhanced performance capability and cost-effectiveness.

The market is divided by region as North America, Europe, Asia-Pacific, Latin America, and Africa. North America has shown major growth in recent years owing to the rise in the implementation of latest technologies in the aerospace industry, increase in the number of aircraft manufactures in the region, and the existence of well-established industrial infrastructure.

Asia-Pacific region is predicted to hold major market share in the aerospace robotics market with massive growth in the forecast period.

Countries such as India, China, and Japan are leading the Asia-Pacific market with strong economic growth in the region, growing domestic manufacturing, and significant investment by leading industry players considering potential growth opportunities in the region.

Million Insights lists the key players in the aerospace robotics market as: