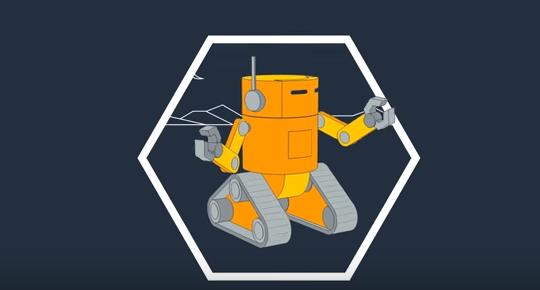 More and more, a wide range of robots are becoming part of our everyday lives, distributing inventory in warehouses, and inspecting pipelines, smokestacks, and high-voltage wires in dangerous industrial environments.

Robots accomplish these tasks through instructions expressed in software applications that receive and process sensor data and control actuators that create movement and action.

All of this effort severely limits the number of robots and intelligent functions in use today.

AWS RoboMaker addresses these challenges by providing an integrated set of software and services for customers to develop, test, and deploy intelligent robotics applications at scale.

Within the system robotics development environment, developers can start application development with a single click in the AWS Management Console.

AWS RoboMaker automatically provisions the underlying infrastructure and it downloads, compiles, and configures the operating system, development software, and ROS.

Its robotics simulation makes it easy to set up large-scale and parallel simulations with pre-built worlds, such as indoor rooms, retail stores, and racing tracks, so developers can test their applications on-demand and run multiple simulations in parallel.

Its fleet management integrates with AWS Greengrass and supports over-the-air (OTA) deployment of robotics applications from the development environment onto the robot.

AWS RoboMaker also offers additional ROS packages that connect to AWS services, which developers familiar with ROS can easily use to build advanced functions into their robotics applications.

“When talking to our customers, we see the same pattern repeated over and again. They spend a lot of time setting up infrastructure and cobbling together software for different stages of the robotics development cycle, repeating work others have done before, leaving less time for innovation,” said Roger Barga, General Manager, AWS RoboMaker.

AWS RoboMaker is available in US East (N. Virginia), US West (Oregon), EU (Ireland), and will expand to additional regions in the coming year.