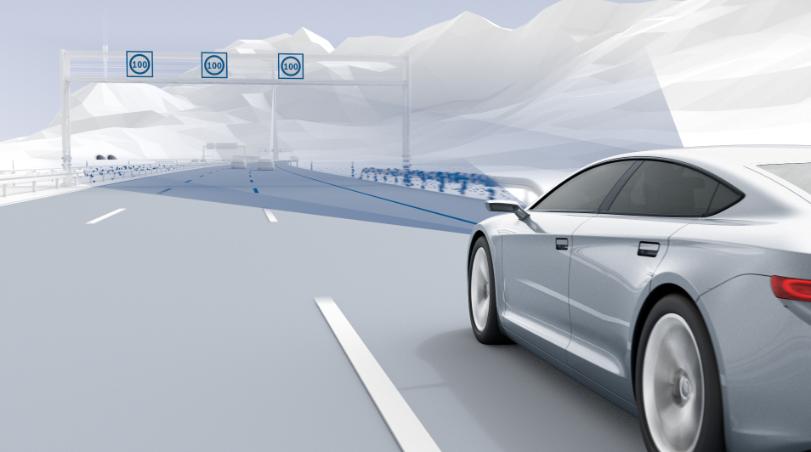 Automated driving is about more than just sensors, control units, and lots of computing power, says Bosch. It also requires a host of smart services, without which no vehicle will ever be able to drive autonomously.

“Services are at least as important for automated driving as the hardware and software,” says the Bosch board of management member Dr. Dirk Hoheisel. “We must pursue all three paths simultaneously to get self-driving cars safely and reliably onto our roads.”

Self-driving vehicles can drive safely only if they know down to the nearest centimetre exactly where they are at any given time, says Bosch. To achieve this, the company offers a  localisation package.

Taken together, its hardware, software, and services serve as a redundant system for precisely determining the vehicle’s position.

Bosch has developed a sensor that allows automated vehicles to precisely determine their position: the vehicle motion and position sensor.

The challenge with satellite-based positioning lies in dealing with inaccuracies in the data. GNSS satellites orbit the earth at a distance of 25,000 kilometres and at speeds of 4,000 meters per second.

As their signals make their way to the ground, they must pass through the ionosphere and layers of cloud in the troposphere, which disperse the signals and introduce errors.

While the signals are still accurate enough for today’s navigation systems, they do not meet the needs of automated driving, says the company. This is why Bosch makes use of correction data supplied by various providers, and why it set up the Sapcorda joint venture in 2017.

With the help of a network of terrestrial reference stations whose positions are precisely known, these providers can correct for the inaccuracy of GNSS positioning information. The correction data reaches the car via a cloud or geostationary satellites.

GNSS signals are not the only information the vehicle motion and position sensor receives: thanks to wheel-speed and steering-angle sensors, which are akin to the human sense of touch, it knows where the car is heading and how fast.

What’s more, the vehicle motion and position sensor features integrated inertial sensors – comparable to the inner ear in humans. Just as people can move around with the help of their senses of touch and balance, so the sensor can use this data to tell where the vehicle is going.

The vehicle motion and position sensor brings together the GNSS position signals, the correction data, and the information from the inertial sensors, the wheel-speed sensors, and the steering-angle sensor.

However, this information alone is not sufficient for the exact localisation of automated vehicles. For precise positioning, the data needs to be processed using intelligent software.

Only then can an automated vehicle reliably know exactly where it is within an area stretching several metres around it and calculate its driving manoeuvres accordingly.

An automated vehicle is localised primarily on the basis of the corrected GNSS signals. If the satellite connection is lost, for instance when the vehicle enters a tunnel, the vehicle motion and position sensor can continue to determine the vehicle’s position for several seconds.

The Bosch road signature is a map-based localisation service based on the surround sensors in the vehicles of today and tomorrow.

Bosch offers the service alongside its vehicle motion and position sensor-based localisation solution.

Video and radar sensors on board vehicles in motion generate the Bosch road signature by detecting stationary features on and by the road, such as lane markings, traffic signs, and guardrails.

In this regard, radar sensors have a major advantage, since – unlike cameras – they can detect road features in the dark or when visibility is poor. Their detection range is also greater.

A communication module in the car sends data relating to features on and by the road to the cloud. There, the features are used to generate an independent map level, which in turn forms part of a highly accurate map.

For their part, automated vehicles detect the road features around them and consult the map to see whether the traffic signs or guardrails they have recognised match those recorded there.

This comparison enables the cars to accurately determine their position in the lane – relative to the highly accurate map – down to the nearest centimetre.