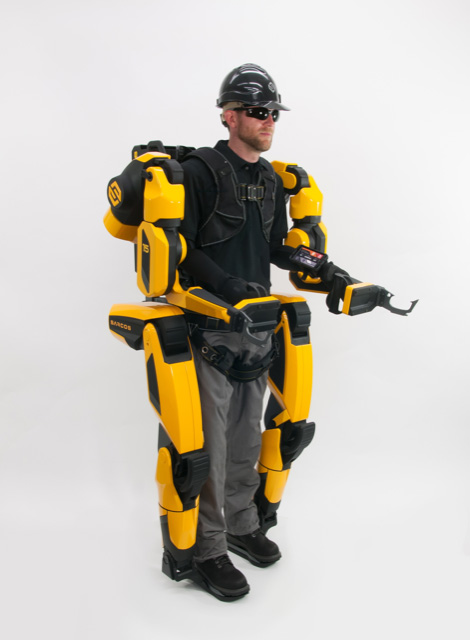 The company, which plans to start shipping the Guardian XO Max to customers in early 2020, has completed the assembly of the world’s first all-electric, battery-powered, full-body industrial exoskeleton capable of enabling a human operator to safely lift and manipulate up to 200 pounds for extended work sessions.

With 17 years of development efforts and more than $175 million invested in research and development, Sarcos says it has been “laser-focused” on ensuring the Guardian XO Max is safe, intuitive and power efficient.

Initial testing of the next-generation Guardian XO Max has demonstrated an unprecedented reduction in power consumption, with the system requiring less than 400 watts of power while walking at human speed.

This reduction represents a 90+ percent decrease in power typically required for humanoid robots while enabling work sessions of up to eight hours on a single charge.

Additionally, the unit is designed to allow its battery modules to be “hot swapped” in the field within seconds without loss of power to the unit.

Ben Wolff, chairman and CEO, Sarcos Robotics, says: “There are many misperceptions regarding the commercial readiness and viability of full-body industrial exoskeletons that are capable of substantially increasing human strength and endurance, including the amount of power required to operate these machines.

“With our innovations in optimizing power utilization, Sarcos has been able to do what no other robotics company in the world has been able to do with powered exoskeletons or humanoid robots—power a human-scale robot doing meaningful work for up to eight hours on a single charge.”

In addition to these power advancements, Sarcos says the Guardian XO Max will usher in a new era of intuitive user experiences through implementation of the company’s proprietary advanced control system, called “Get-Out-of-the-Way” control, to simplify the operation and use of these suits.

Designed to eliminate any perception of latency between the movement of the human operator and the exoskeleton, Sarcos’ Get-Out-of-the-Way control system relies on a suite of sensors integrated into the exoskeleton, foregoing the need to affix sensors directly onto the human body.

This control system enables the Guardian XO Max to respond to the human operator’s movements in milliseconds, allowing the operator to intuitively control the robot in a way that leverages his or her instincts and reflexes, and minimizes the need for human training.

In addition, the exoskeleton design allows a worker to get in and out of the suit in less than one minute.

Occupational back injuries cost US employers more than $100 billion annually, underscoring the need to improve worker safety and provide a means to eliminate strain on the body.

Sarcos has designed the Guardian XO Max to be full-body and fully-powered, meaning the entire weight of the suit, as well as its payload, is transferred through the suit’s structure to the ground. This results in offloading 100 percent of the weight the worker is bearing, as well as the weight of the suit itself, and thereby substantially reducing the operator’s metabolic output and drastically reducing the risk for worker strain or injury.

Initial testing of the Guardian XO Max has demonstrated a strength amplification of 20 to 1, making 100 pounds of weight feel like five pounds for the user while providing a commensurate increase in productivity.

“Sarcos’ Guardian XO Max will be a game-changer for the industrial workforce, improving strength and capabilities, reducing the risk of injury on the job, and increasing the quality of life and longevity of workers.”

In addition to its product advancements, Sarcos continues to foster innovation in the robotics industry.

The company, in collaboration with Virginia Tech University, recently announced a $3 million award from the National Science Foundation to conduct fundamental research to evaluate controls and human-machine interfaces for powered exoskeletons in order to increase productivity and reduce the risk of injury.

Earlier this year, Sarcos also formed its Exoskeleton Technical Advisory Board (X-TAG), which is comprised of executives from leading companies across a variety of industries such as industrial manufacturing, automotive, aviation and aerospace, construction, oil and gas, logistics and utilities.

The X-TAG is working to identify key performance and safety requirements necessary to ensure that the Guardian XO Max meets the needs of Sarcos’ customers.

Wolff says: “We’ve already seen significant early interest in pre-orders across numerous industries, and we are working closely with the members of the X-TAG to ensure that the Guardian XO Max delivers on productivity needs, while keeping workers safe and out of harm’s way.”

Sarcos’ Guardian XO Max is expected to be released commercially in late 2019 and begin shipping to customers in early 2020 and will be offered exclusively through a fee-based robotics-as-a-service model.