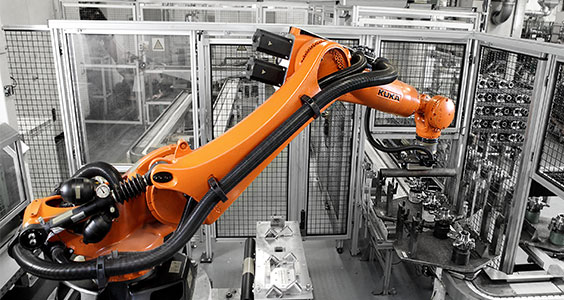 Kuka says it has won another major automotive contract, this time with German giant Daimler.

Kuka says Daimler is “increasingly investing in leading-edge technology products from Augsburg”, meaning Kuka, because Kuka is based in Augsberg.

For the body-in-white production of the new C-class, Daimler has awarded a major contract to Kuka.

The order value was not made public, but Kuka says it was booked in the third quarter of 2018.

Production systems for the front and rear end, as well as the underbody line, will be built for a number of derivatives.

A total of around 800 industrial robots from the KR Quantec series, complete with the KR C4 controller, will be integrated at the plants, together with various automated guided vehicles that round out the flexible production concept.

Dr Till Reuter, CEO of Kuka, says: “We are delighted that our longstanding customer with its demanding technical standards has once again opted for Kuka.

“This contract is recognition of our innovative technologies and products.”